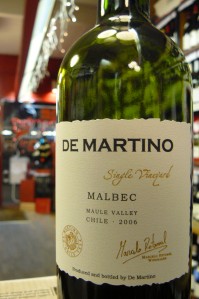 Today is Wine blogging Wednesday (#52)!! Our mission, given to us by Cheapwineratings.com, was to pick a Chilean wine for under $20 bucks or value reds from Chile as they put it. With the exchange rate what it is now, we settled on a Chilean for under £14 (approximate, but with the pound sinking it might be less now). 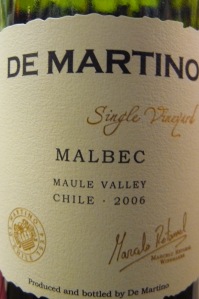 At Oddbins we have quite a nice selection of  Chilean wines, both red and white but since my assignment was red, I went for the  De Martino Single Vineyard Malbec ’06 (£11.49),  from the  Maule Valley. De Martino pride themselves on travelling the length of Chile, choosing only the finest terroir to bring out the best of the chosen  varietal and employing expert consulants to make fantastic wines.  Marcelo Retamal, their winemaker, is a rising star in Chilean oenology and it shows. This  particular malbec vineyard is located in an isolated (and one of the driest) parts of the Maule valley with  granitic  soils and bush-trained 80 year old vines.  According to the website, the vineyard is run by one man  and his horse so I guess you could say there is minimal intervention in the production of  the wine. I think Chilean wines are amazing value for money and this malbec did nothing to dissuade me.

On pouring it was a deep, intense garnet, almost inky – staring into it, it was impossible to see the bottom of the glass.

On the nose first off, black fruits, concentrated cassis, and spices – a bit of nutmeg, hint of cinnamon, almost smelled like baking cookies with vanilla bobbing about and violet notes coming through on the tail of it all. I had to let it sit for a few minutes because I was interrupted but I was glad I did because the aromatic notes coming off were even more spicy now. Although they were not as intense, they had evolved into molasses and the the smells of rich mince pie. Perfect wine for Christmas.

Despite it being so rich on the nose, on the palate, it was fresh and fruity.  Fresh blackberry tart, black cherry, licorice, toast and a nice long chocolate covered fruit finish. Very yummy, pure fruit throughout but with great balance and well integrated tannins.I had it with pork escalope, broccoli (not so good with that but have to have my green veggies) and a tri-colore salad, delish.

Chile is producing some quality wines at very reasonable prices. Argentina is known for their malbecs but I think Chile does them just as good if  not better (sorry Argentina). If you need any proof, look no further then De Martino. Ona by Anakena, another great producer, is also worth looking for,  but I’ll save that for another day. I don’t know if you’ll be able to get this wine for less then a twenty in the States but if you can or even if it’s a bit more, it’s well worth snapping up.