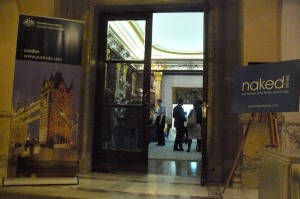 Ok, here’s is a crazy idea. Invite consumers to try some wine, pick the ones they like best, set a price and then buy $100,000 AU worth of wine based on their recommendations at a live online auction for your online wine company. Who would be so crazy as to let consumers do that? Rowan Gormely  founder of Naked Wines, that’s who.

Rowan, happy it's over!

The latest in interactive social marketing, using crowdsourcing (a new word for me), twitter and blogging, Naked Wines took a gamble and it seems to have paid off. I’m still a bit unclear on the whole “crowdsourcing” thing but seems to be like a casting call for ordinary people. Although, in this case you show up and get to try lots of interesting wines! There were some of the twitterati in attendence, Milo Yiannopolous, the techie blogger from The Telegraph and Gavin Williams of Wine of  the Week were there but most people were customers of Naked Wines.

The event was held at the Australian High Commission on the Strand and all wines tested and bid on were Australian reds, whites and a few rosès for kicks. Interestingly, none of the rosès made it into the final.  I had a ball! It was really fun to give my opinion on a wine and know that my decisions would have an impact. Talk about empowerment to the people. No more having to rely on some wine critic who probably only really drinks claret from the early 20th century. The wines on show were a real grab bag and I have to admit some of my choices didn’t really jibe with the general concensus but enough of them did to get into the live auction. 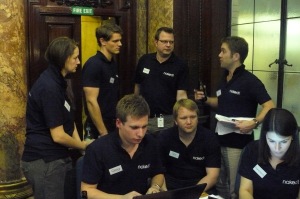 Once the wines had been winnowed down to the final 15 we had to each set a price for what we would pay, then, thru some mysterious algorithythms, the Naked team came up with a price, the money was divvied up, the Australian winemakers were called and the bidding began. We were all able to watch the bidding via a live money graph, every time a wine went up or down in price there were loud hoops and hollers from the crowd! I was sitting at the twitter/auction table and it was really exciting to hear and watch Rowan, Greg and Francesca work the auction.

Winesleuth's winner of the night!

When the winning prices were announced, lots of jumping up and down from everybody! And one of my favourites, Ladies who shoot their lunch Chardonnay was one of the wines bought in the auction. Unfortunately, only a few cases were bought because it was a bit pricy but I think I’ll be able to snag a bottle or two before they’re all gone.

Is this the future of winebuying? Crowdsourcing, twitter and, hopefully, liveblogging, in the near future? The consumer making the choice, setting the price and the retailer selling on the wine to fellow consumers? It may sound a bit odd and a sure money loser but I think I’m more inclined to buy a wine from a group of my peers then some wine critic I’ve never met or had any interaction with. We shall see…..