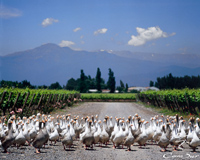 I don’t know what it is about the summer but I just haven’t been in a writing mood lately. Which is a bit of a shame because I’ve been going to some great tastings lately. For example, I went to a winetasting a couple of weeks ago hosted by the delightful Chilean winemaker, Adolfo Hurtado of Cono Sur Vineyards and Winery of Chile. People often make the mistake of thinking that Cono Sur is synonomous with the big brand, Concha y Toro.  Although Cono Sur is a subsidiary of Concha y Toro, it is completely independent from it, making their wines in their own distinct fashion.

Winemaking came to Chile in the 1850’s with the French winemakers who were fleeing the phylloxera crisis that was plagueing the Continent at the time.  The French settled in Maipo Valley because pragmatically enough, it was the closest vinegrowing region to Santiago de Chile, the capital. Besides the Maipo Valley, there are also the Colchagua, the Casablanca, the Rapel, the Maule and the Bio Bio Valleys, all of which are used for grape growing and winemaking.

Chile is ideally situated to produce wine,even if it’s a long thin strip of land clinging to the western coast of South America. It’s bordered on one side by the Andes Mtns and the other by the Pacific Ocean but the centre of the country is a series of valleys, of geographical islands that have historically been phylloxera free and disease free. Chile also benefits from the Humboldt Current of off the coast which helps to cool down the inland valleys in summer. And, it is a very dry country receiving very little rainfall throughout the year. For this reason, wineries have to irrigate but they do have access to the glacial waters of the Andes Mtns, which on a positive note is great for organic production because no seeds or other unwanted detritus is brought in with the irrigation water. 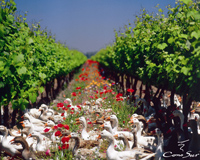 Geese among the poppies

That’s not to say that Chile is pest free but Cono Sur has come up with unique ways to deal with the various creepy crawlies that can invade Chilean vineyards. One of the most common is the burrito, an insect that eats all the shoots and bunches, destroying the vine. Rather then using pesticides, they apply strips of cloth soaked in a blend of garlic and glue which attracts the insects them and prevents them from climbing up onto the vines. They also have 1000 geese at the Chimbarongo estate to eat the burritos and then fertilize the area. The only problem with the geese is that they do like the grapes, so  they are sent off  to gaol as Adolfo put it , banned from the vineyard for 3 months until the grapes have been harvested. In this way they are able to use totally natural methods to get rid of the pests and  avoid using chemicals and pesticides.

Another pest is the California Trips which eats the flowers of the vine. Cono Sur plants poppies between the vines to attract the california trips and they live there instead of on the vine. Just another great example of using natural methods for pest eradication rather then reaching for the pesticides. It also makes for a beautiful poppy strewn vineyard.
Cono Sur first began their organic venture in 1999, planting 40 hectares in the Colchagua Valley. Since then, Cono Sur has been committed to organic grapegrowing and winemaking practices and promoting organic viticulture in Chile. They have even begun to use wild yeasts in their organic wines. In 2002, they were the first South American winery to earn double ISO certification. They currently have 400 hectares which are  under fully organic certification and in  2005,they were certified for agricultural good practices. 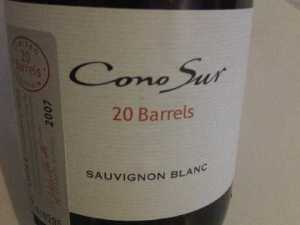 Adolfo brough his organic wines for us to try, the limited edition 20 Barrels range of  Cono Sur which consists of 100% sauvignon blanc, chardonnay, merlot, cabernet sauvignon and pinot noir as well as their premium offering the Ocio.
My tasting notes from the session:
20 Barrels Sauvignon Blanc 2007 – bit cloudy, tank sample, lovely nose of acacia, white flowers, fully organic, sancerre blanc clone. A palate of citrus, ripe white fruits, hint of minerality and capsicum.
20 Barrels Chardonnay 2007, creamy, butterscotch nose, the barrels were left to sit for 2 weeks with water and salt to remove the oaky toastiness of new oak, this allows it to keep tannins while toning down the oak notes. A palate of  ripe tropical fruits, starfruit and citrus with a limey finish, a smooth, mellow wine.
20 barrels Pinot Noir 100% from Casablanca 2007 – ripe, red fruits hints of the earth and violets notes, savoury, earthy, rich and full red fruit characters with quite a bit of acidity, nice example of new world pinot noir, can age for 7 to 8 years in bottle, very vibrant and lively.
20 Barrels Merlot – wood spice, chocolate, completely different nose from a typical new world merlot, herbal, rich and full, chocolate, mocha, black plums, again really lively, not at all sluggish like so many new world merlots, really stands up in the glass

Adolfo Hurtado, Chief Winemaker
20 Barrels Cabernet Sauvignon, black cherry, cassis, again very lively, black plums, nice body.
The 20 Barrels wines are available from various stockist in the UK, including Waitrose and Oddbins, retailing for around £20.
The last wine of the evening was Adolfo’s icon wine and ultra premium Pinot Noir, the Ocio, it’s name comes from latin word for autumn but it’s also Chilean slang for (ocioso), lazy or meaning a time to enjoy. I certainly did enjoy this wine,  100% pinot noir, a  nose  of  lifted, candied notes and  sweet spice, the palate was full of  rich ripe red fruits, cinamon and hints of savouriness , vibrant and still sharp red fruits in there despite it’s age, it’s still showed plenty of promise. Available from the Wine Society, £30.