My infatuation with Italian wine continues. A is for Amarone. B is for Brunello di Montelcino, bodalicious, complex, tasty, lipsmackingly satisfying (ok,so I’m skipping around the alphabet and making up words) you get the point, I do love those Italians. Growing up with only the familiar wicker covered funnily shaped bottles of Chianti, that was my only exposure to Italian wine, that and the cheap dross I encountered when I first came to London as a student. The good old days. Why do they call them the good old days? I’d much rather be in the now and the fabulous wines I had the other day at lunch.

A typical wet, dreary London afternoon found me on Savile Row on my way to the smart Italian restaurant, Sartoria, for lunch with Bibendum and Cristina Mariani-May (the next generation and co-CEO of the company) and Dante Cecchini (regional manager) of Castello Banfi . Bibendum is now importing the Castello Banfi range into the UK so this was our opportunity to sample their wares. Castello Banfi orginally started out importing Italian wines to America early in the 20th century and built up a very successsful import business but in 1978 they decided to head back to their native land and founded the Castello Banfi Vineyard Estate. Once there they spent a considerable amount of time and money on research and are now one of the leaders of classifying sangiovese from Tuscany.  They’ve spent over 30 years on research and catalogued over 160 clones which they’ve narrowed that down to the 15 best clones for their wines. And Castello Banfi has generously shared their research with the world because they believe ..”all ships will rise when the tide comes in…” and their research can only benefit all of Montalcino. Castello Banfi were also one of the first to plant international varieties in Tuscany, creating the “super-Tuscans” and we got to sample one during lunch.

Nothing more civilized then a 5 course meal with matching wines for lunch, now is there? 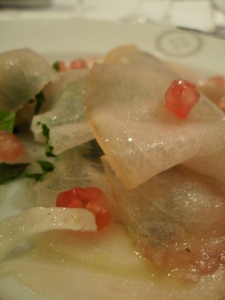 The food was fantastic but the real stars of the show were the wines. The San Angelo 2008 pinot grigio was first out the gate and the sommelier, Michael Simms never let my glass less then half full, just the way I like it. I have to admit, pinot grigio is not my go-to wine for anything, usually a lemon water drink in my mind but the Banfi San Angelo had a bit of weight to it, fresh and zippy, not too much acidity which is often the hallmark of p.grigio,  colourful citrus aromas and flavours seeping through, washed down the zucchini frites and parmesan cheese down in one go.

My favourite chards are French Maconnais but Banfi may have managed to at least close the gap a bit. The aim of the Fontanell Chardonnnay 2007  was to produce an ‘Old World’ style, barrel fermented and aged white wine. Banfi want to show what the Italians can do with the chardonnay fruit of the Tuscan hills. Well integrated oak ( I so dislike over-oaked chards), ripe apples, slightly nutty, on the nose and palate, full and concentrated, a good complement to the fish, it wasn’t overpowered by the rather strong flavours of the smoked fish. The finish was delightful, a fruity beacon shining thru the haze of fishy smokiness. I was liking it but onto the real reason we were there, the reds. Those whites were just the warm-up act.

The Rosso di Montalcino 2007 and the Belnero 2005 were both paired with a pasta, turnip top & anchovie dish. A rich, creamy, savoury dish that needed something with a bit of bite. Both the wines were juicy and fruity,  the Rosso had quite a minerally, flinty nose to it and was a much more austere companion to the pasta, still fresh and versatile but quite lean whereas the Belnero was much fleshier and full. These two were like the Laural and Hardy of  Banfi. The Belnero is new to the line and Banfi wanted to show the potential of their Super Tuscans. 80% Sangiovese, 17% cabernet sauv. and 3% merlot, a complex wine, notes of vanilla, tobacco and coffee, black cherries and plum jam, much less minerality but it didn’t suffer from that. The fruit was far more intense then the ’07 and there was a spicy undercurrant to it all. Both wines were excellent companions to the pasta but the ’05 was a better match, as Cristina said, …”if only we could have our partners young and our wines old, it’d be a perfect world!” I love those Italians….

I had been trying to pace myself because I knew there was a big hunk of meat coming up but I wasn’t prepared for the mound of beef that was placed in front of me. Grilled Scottish Beef Rossini with foie gras and truffle shavings – so decadent and wrong but sooo good, the foie gras (look away now if you’re against it) had me swooning, melting away on my tongue in a flash but the flavours so intense. Banfi showcased their Brunello Poggio alle Mura 2004 and Poggio all’Oro 1999 to go with such intense meatiness.

But that was not all, one more Brunello to go, the Poggio all’Oro 1999. Again 100% sangiovese – 2 and a  half years in barrel and another 2 in bottle, this wine was soft, elegant and yet full of character, vanilla and butterscotch nose, dried raisins, plums and cherries, intense fruits and a long finish that carried on and on. Eventually, it seemed to evolve into cherry bonbons  and spice. Still looking youthful and full of life, I could have drunk this on its own or with a meaty mouthful, just a pure delight to savour.

Cristina Mariani-May and The Sleuth

We finished off with the Rosa Regale 2008 with a dessert of roast figs with honey and thyme ice-cream. A fun, fruity sparkling wine made from the indigenous varietal brochetto  ( I hope that’s how you spell it, my notes started to look a bit like chicken scratch by this point), loads of red fruits and off dry, a fun sparkler to end the afternoon. And so I rolled out of there, satisfied and sated, a great way to start the weekend. 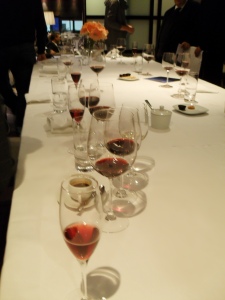 end of the line

ps. I found out later the sparkler was made from Brachetto d’Aqcui

6 thoughts on “Castello Banfi Brunello and a long Friday lunch”