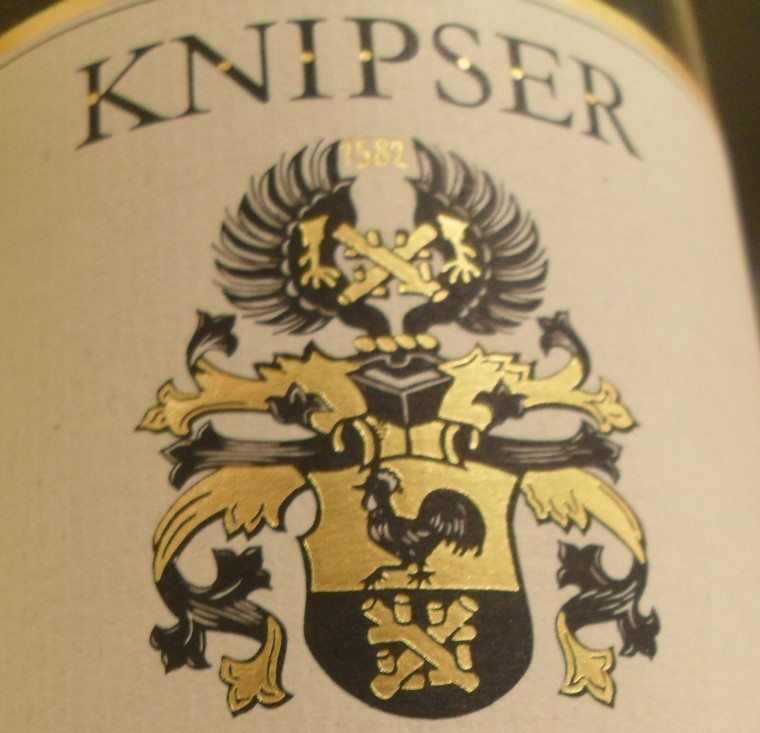 Torsten, The Winerambler, likes his German wines and he likes to trip me up with his unusual and rare finds so it was with much anticipation that I arrived at his house last night. He had promised a mystery wine and he swore I wouldn’t be able to guess what it was. Well, I have to say the cards were stacked against me, seeing as other then my favourite Riesling, I don’t have that much experience with German wine blind tastings but I was game. I had had various obscure wines at Torsten’s before so I thought I might have a fighting chance. I had seen the label briefly so I knew it was a VDP and it looked like a Weingut Knipser but that’s all I knew.

While we waited for the risotto to cook, Torsten poured the wine. A clear vibrant yellow, it looked like a bright summer’s day in a glass. Nosing it, not too aromatic, bit of apricot and overripe peach, you know when it get’s to that point when it’s just about to turn and go off, not unpleasant just very sweet and slatey, you could smell the rocks. On the palate, more of the very ripe peach and apricot but with great acidity and honeyed toasted notes. Did I detect a hint of petrol? Aged riesling!? no, too obvious….a rather oily, mouthfeel…hmmm, Semillon? Viognier? No. A finish of bitter Seville orange marmelade…pinot gris aged in barrel (well, he did say it was unusual)?  Nope. Oaked chardonnay? Not-uh. By now I just started naming off all the white German varietals I could think of, sylvaner, pinot gris, gruner even! I did get into the ballpark with it’s age, guessing it to be about 9 -10 yrs old, it’s 8 yrs old, a 2003. 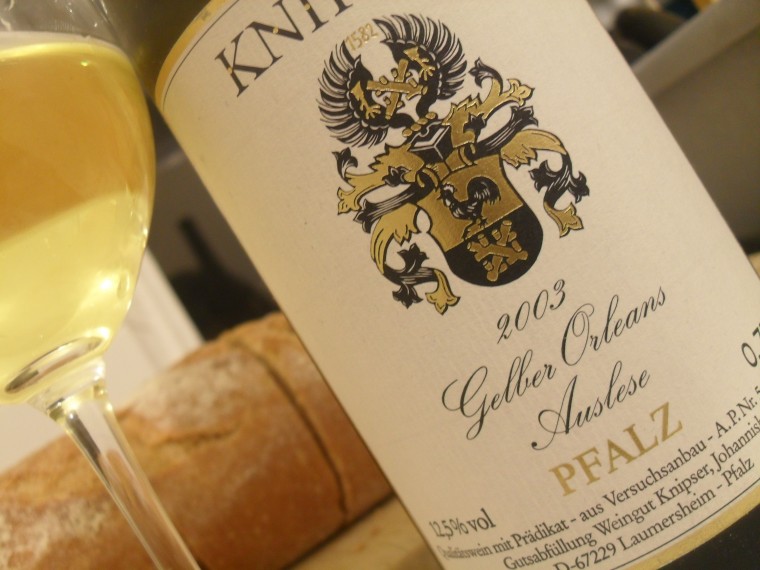 Although Torsten  was enjoying this guessing game, he finally put me out of my misery and did the great reveal…..the Knipser 2003 Gelber Orleans Auslese. The what? Gelber Orleans? Yeah, like me or anyone outside of the Pfalz has ever heard of that one! But what fun to try an obscure varietal.  Torsten related the tale of how Gelber Orleans dated back to Charles the Great and was widely planted in the Rhine and Palatinate. However, by the 19th century it had been surpassed by riesling and fell into obscurity, uprooted and forgotten except for a few plots here and there in the Pfalz. Wiengut Knipser specialize in cultivating more obscure varietals as well as the greats and they have a small experimental plot of Gelber Orleans where they make not only off-dry but also barrel aged and sweet Gelber Orleans.

A delightful  find but yet again something that you can only get in Germany. Drat those Germans and their miniscule, experimental wine productions!