Good grub at the Fox and Anchor (& the wines are pretty good, too) 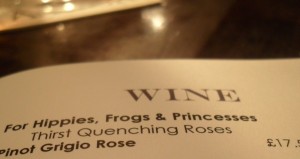 How can you dislike a wine list that divides it’s wines into amusing descriptions like these? I came across that saucily titled winelist at the Fox and Anchor, a pub in Smithfields that wants to be more then a boozer but less then one of those chi-chi gastropubs that seem to have taken over the capitol. As Scott Malugh, general manager, explained to me, he wants to the Fox to go back to it’s roots as a place where you can go and relax with a pint. Where, cliched as it may be, “everyone knows your name” But Scott not only wants to make his pub friendly and personable, he also wants to offer patrons, both regulars and passersby, good British food and not charge an arm and a leg for the pleasure of dining on local produce.

The pub is divided in two with the front half having a traditional bar on one side and tables lining the wall opposite. It’s only when you pass by all that into the second room that it you walk into a small dining room surrounded by cozy dining “snugs”. Semi private small rooms that seat from 2 – 4 people, perfect if you want to have your own little party while still being able to look out the doorway and see all the action. While I was waiting for my dining companion, Ms Fundamentals to arrive, Scott suggested I try one of their real ales. The Fox has an extensive list of real ales both on tap and in bottle, mostly from the UK but I did spy Sam Adams from the good ol’ US of A on there. I wanted something different so asked Scott to surprise me. Chalky’s Bark, bottled ale from Sharp’s was duly poured. An ale with real ginger added for a bit of a kick. Not exactly your traditional English ale but it was tasty and I could certainly get used to drinking it. Not too heavy either, I sometimes find ale just too much for me.

Besides ales, there’s also a cocktail list, in a nod to all the trendy young things working close by in Clerkenwell and a rather comfy winelist. I call it comfy because I was quite familiar with many of the wines. The Fox uses BibendumWine as their main supplier and I know their wines quite well. Bibendum sources very good wines and I have rarely been disappointed with their wines. A mixed bag, the list was comprehensive without being overindulgent, from Australia to Argentina, classic white Burgundy to some lesser known Italians, I probably could have spent quite some time reminiscing about the wines but we were there to eat and I could tell that Fundamentals was not as interested in the list as me (yeah, wine geek alert). The wine list is also reasonably priced ranging from £15 to about £40 with a few pushing out the boat to £60 for fine French wine.

The food itself is comfort food made with local seasonal produce. Raw oysters,trad fish and chips, bacon chops, scotch eggs, welsh rarebit, onglet, all on the menu, hearty and hale, nothing too fancy. They even offer a carving trolley for die hard traditionalist. Being American, I’m a sucker for soft boiled egg and soldiers. We don’t have those in the States. The Fox’s soldiers come topped with cheese and anchovies along with a goose egg to dip them in. I love anchovies. And cheese. We also ordered a scotch egg with curried  mayo. I can’t fault either dish, well made, delicious, we just plowed into them.

For the wine, I asked Scott to pick something and he came up with the Knappstein Three, a blend of gewurtz, riesling and pinot grigio from the Clare Valley. Quite fruity, I would have preferred a wine with a bit more acidity to it. The wine was lovely on it’s own, though. There was also a red wine that Scott picked out for us, the 2009 Loredonna pinot noir from California. I wasn’t sure if it would work with the food but it did. Dried cherries and some definite smoky minerality coming off the wine, it was delicious with both the soldiers and the scotch egg.

We were already getting full so we shared a tomato mozzarella salad and the fish finger with chips and mushy peas. I wasn’t sure what to expect from the fish finger. Images of deep fried batter and some unidentifiable white fish were running round my head. The fish finger was nothing of the sort, flaky cod encased in a golden crumbed coat, sitting atop the best mushy peas. I have discovered the perfect mushy peas. Mushy peas are so much more then mushed peas. I love the creamy/chunky texture of just mushed peas and the Fox’s were perfectly mushed…Mushy, mush,mush,mush. I love that word when used in conjunction with peas. I could have ordered another side of them.

A cheese plate with 10 yr old tawny rounded out the evening. A fine selection of English cheeses, including Stinking Bishop which we ate pretty quickly to get rid of the stench! That stuff does stink even though it is a mighty fine and silky mild cheese. Looking at the prices, starters were in the £5 – £7  range and mains fell between £10 to £16.

We were one of the last to leave the pub but not the last. There were still a few locals holding up the bar, having a laugh with the barmen as they cleared up for the night. I really liked the Fox and Anchor and even though it was our first time there, I left as if I had been going there for years. Ms. Fundamentals, observed that she was pleasantly surprised by the excellent level of service as well as the menu, being more then just your run of the mill tired roast beef and yorkshire pudding pub fare but less then, nor aspiring to be, a Michelin starred gastropub. A comfy, cozy, friendly pub, just the kind of local you’d like to spend your evenings in. 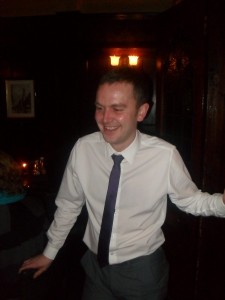 The Fox and Anchor is in Clerkenwell at 115 Charterhouse St., City of London EC1M 6AA

2 thoughts on “Good grub at the Fox and Anchor (& the wines are pretty good, too)”