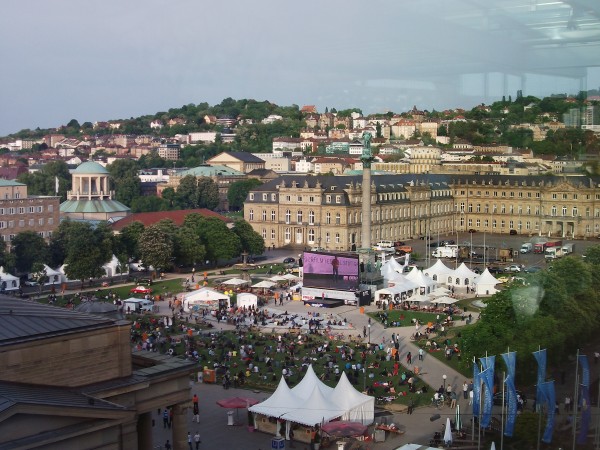 When I think of German wines, I think of their delectable rieslings. Be they kabinnett or trockenbeerenauslese, whenever I think of German wines, my mind goes immediately to the striking white wines of the Mosel and the Pfalz. But did you know that Germany also does red wines? And have done for centuries? I have written a fair amount on German reds but mostly as anomalies that stood out from the white wine crowd. They were,to those outside of Germany, obscure wines from small producers who wanted to show what Germany could do with syrah or pinot noir. 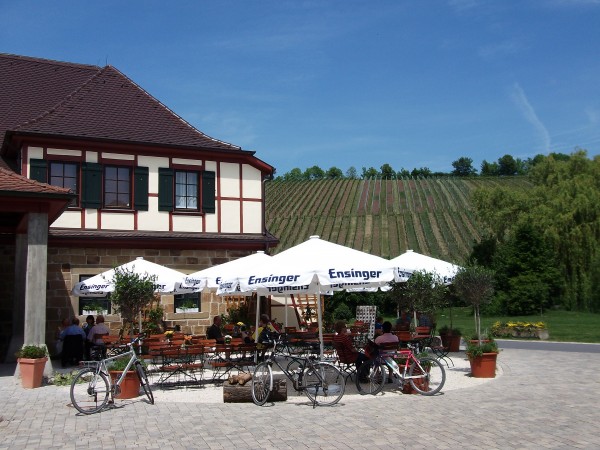 wien garden in the hills of southern Germany

Well, I learned that riesling is not the only wine that Germany grows on my recent trip to Wurttemberg ( with the German Wine Institute), a wine growing region in the south of the country, where they have been growing and making red wines for centuries. If you’ve never heard of trollinger, lemberger, heroldreb, fruhburgunder or schwarzriesling, join the club. 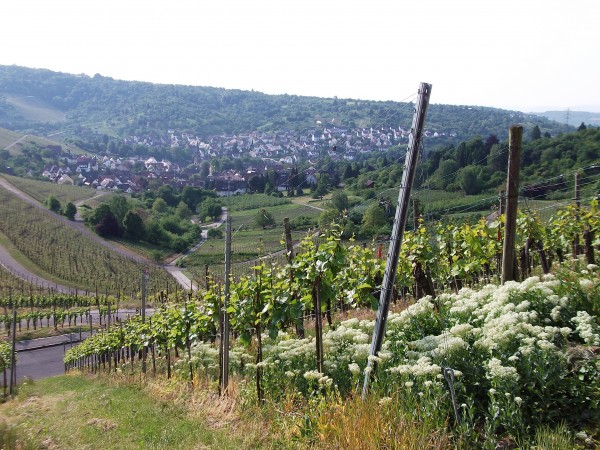 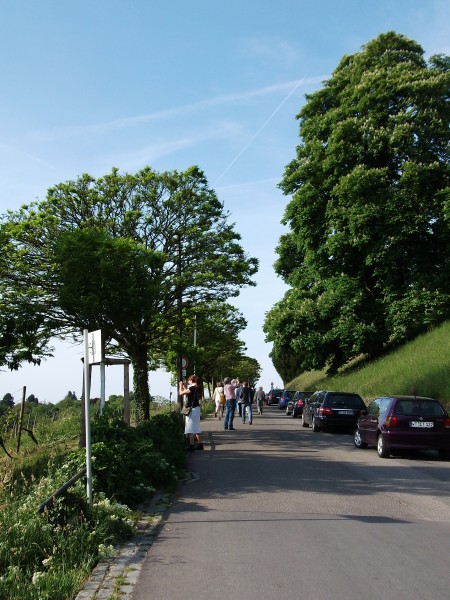 the hill we had to climb for our reward... 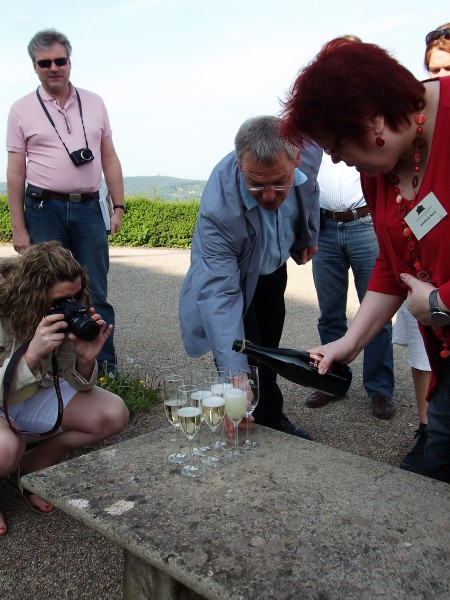 The most comprehensive tasting we had was of the wines of the Collegium Wirtemberg, a co-op of local growers just outside of Stuttgart, they are one of the biggest and after tramping up a rather large hill, we got a lovely view of the surrounding vine covered hills and a taste of their Cuvee blanc sparkling wine before heading to the main winery/tasting room downhill. 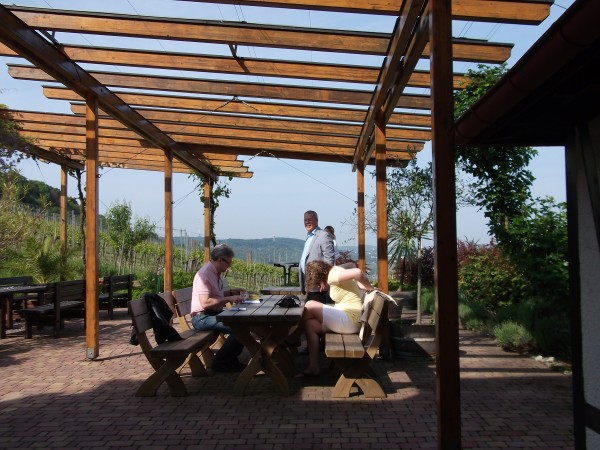 Trollinger is probably the wine they are most proud of and it has been called the “national drink of Wurttemberg”. A light and fruity wine with a bite to it, it reminded me, when done right, of a Beaujolais cru. Other times, it was a rather rustic wine but Collegium Wirtemberg managed to produce a lovely little wine, perfect for a sunny afternoon amongst the vines. 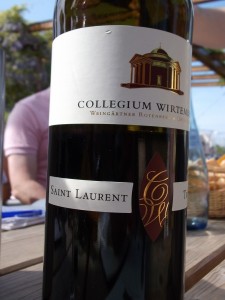 More substantial wines they produced came from the lemberger, St. Laurent and spatburgunder or pinot noir grapes. While I say they were more substantial, I would say that is in relation to the trollinger. All the wines were medium bodied and were more savoury in character then fruit driven. The St. Laurent is one that is also grown in Austria where it produces some quite robust wines but the wines of Collegium Wirtemberg while full of character were not blockbusters. That is something however, that I appreciated, good wines that were not over oaked, extracted or alcoholic. 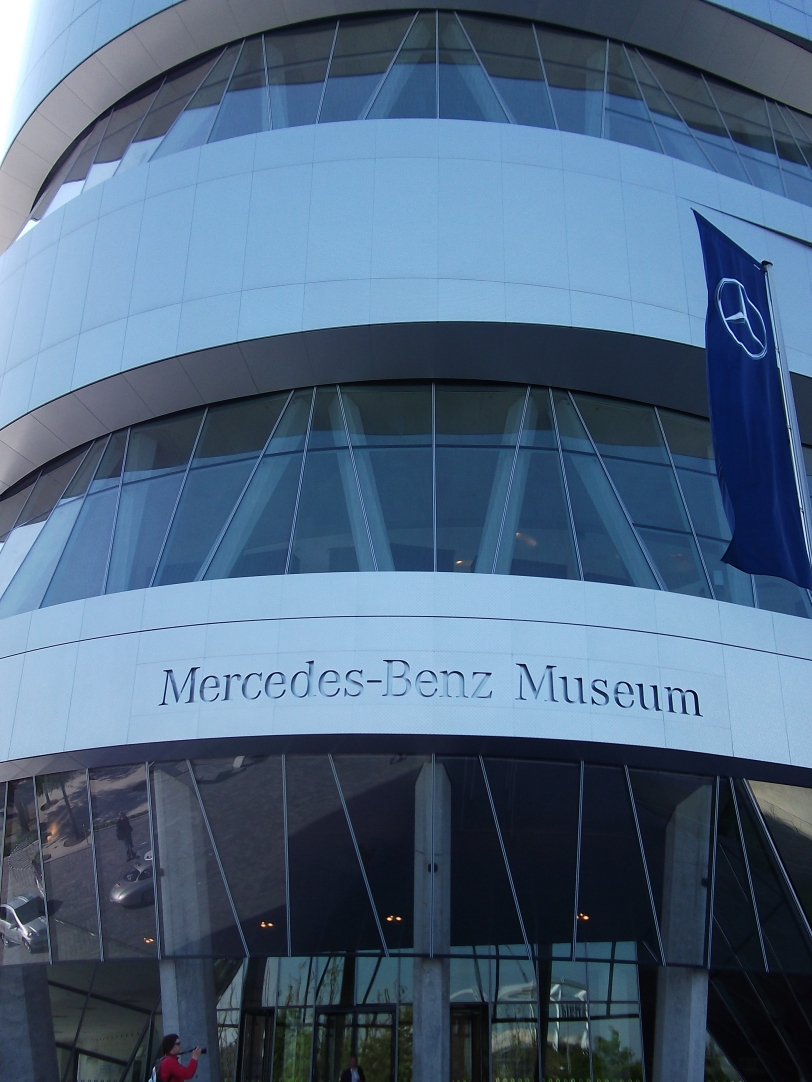 "oh, lord, won't you buy me a Mercedes Benz" the museum entrance 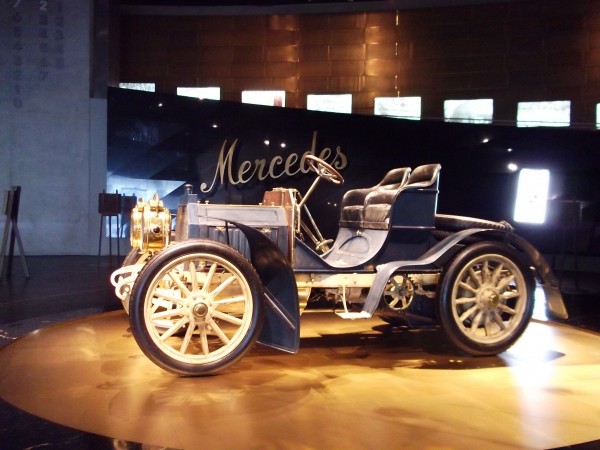 This trip was not all about wine though. We got to visit the Mercedes Benz museum in Stuttgart one morning  If you ever get to Stuttgart, you have to visit the MB museum. It is awesome. The building is comprised mostly of windows that wrap completely around the building and everything is very well organized with the tour starting at the top of the building and slowly spirally down along the outerwalls of the building.An interesting side note, they have have the world’s largest artificially generated indoor tornado. This is caused by giant turbines they have on the ceiling which would be used if they ever had a fire in the museum. Check out this vid I found on youtube…

They even have a history of the world from the founding of the company up to modern times and they don’t skimp on their Nazi history either which I found to be very honest of them. It would have been easy for them to gloss over it. After the tour, we had a small winetasting in their rather chic restaurant with a small selection of local producers. 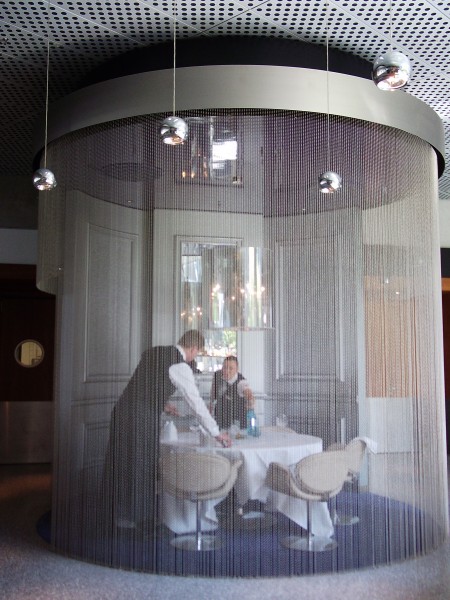 a table at the Mercedes museum cafe 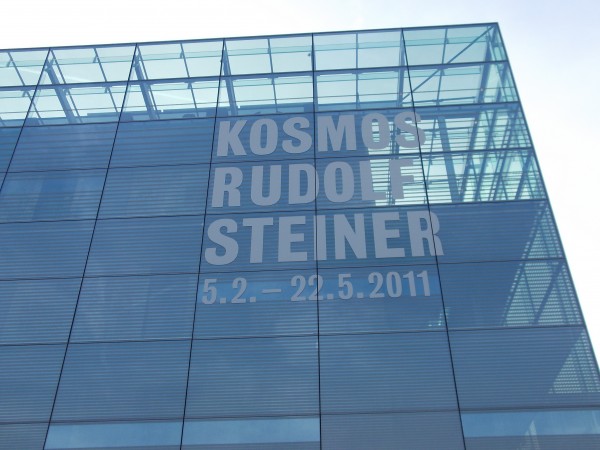 Rudolf Steiner exhibit while we were there, the Museum 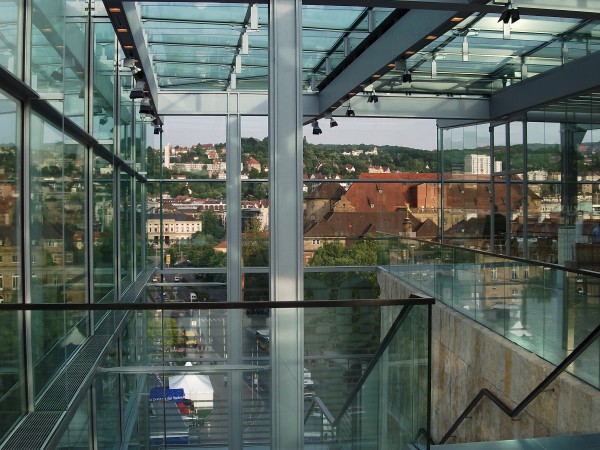 interior view of the Cube

Other highlights of the trip included a meal at the top of the Cube Restaurant at the top of the Kunstmusuem Stuttgart. Amazing views from the glass enclosed restaurant and some very interesting modern German cuisine paired with the local wines made for a great evening. We also visited the very first outlet mall in the world which I didn’t know was founded in Germany, of all places, by Hugo Boss. And here I thought he was Italian or something! 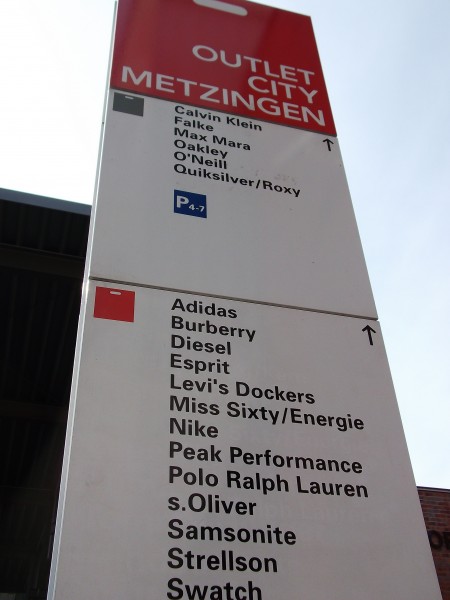 at the outlet mall

our motley gang winetasting on the roof of a carpark

While we were at the mall, we had a winetasting in a rather unusual place – the roof of a carpark! Prior to visiting the outlet mall, we had stopped by the Wine Museum of Metzingen, the Metzinger Hofsteige. Our museum hosts also produce wine and we were treated to a light but nicely structured spatburgunder, spicy more then fruity but a nice little wine, over looking the mall and beyond that, the mountainous hills of southern Germany. 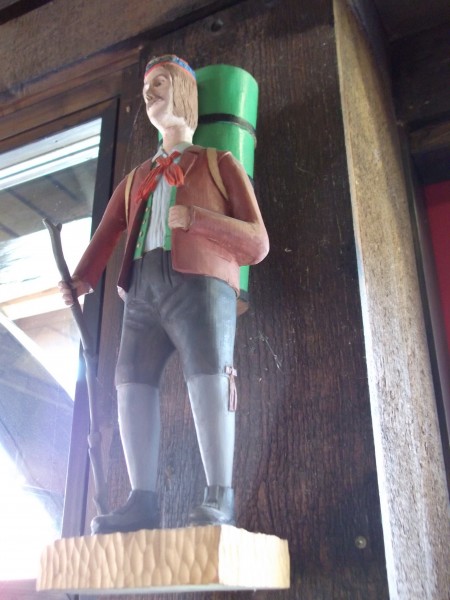 original grape press built in 1655 in the Metzinger wine museum

We also visited a spa and golf resort, The Wald & Schlosshotel Friedrichsruhe but I have profiled that in previous post. All in all a great trip to the south of Germany. There’s more to it then beer gardens and pretzels. I’ve always liked German wines, interesting and not your usual run of the mill varietals and there is plenty to see and do from shopping to museums and a day or two at the spa to finish it off. If you’re lucky like us, the weather will be nice and sunny and you can really enjoy German hospitality. 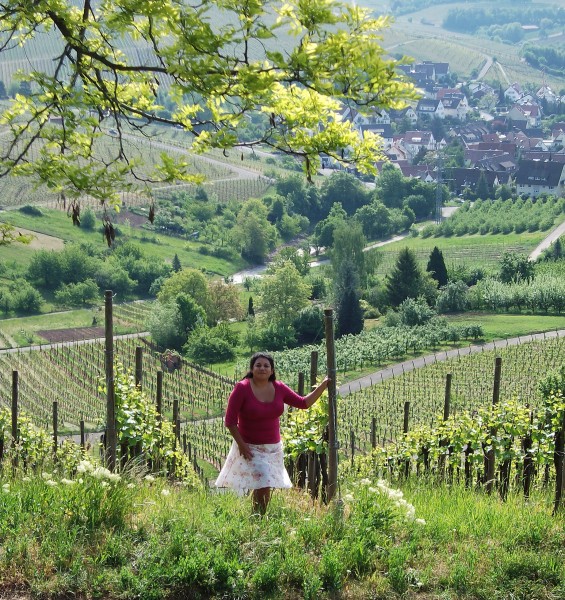 The Winesleuth amongst the vines of southern Germany