Bistro du Vin Clerkenwell (and soon to be in Soho) 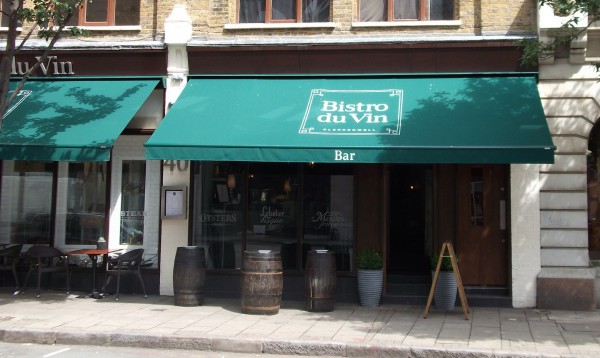 I’ve been to the Bistro du Vin Clerkenwell now a couple of times, once for dinner and once for lunch and both times I can say that I enjoyed not only the meals but also the wineslists. I know I’m a bit of  a wine geek (ok, a lot of a wine geek) but I do love to look at winelists whenever I visit a new place and see if there are any surprises to be found. One thing that Bistro du Vin, actually all of the Hotel du Vins (which BdV is part of) do is always have something interesting on the list.

Bistro du Vin is a spin off of the Hotel du Vin chain that was founded in 1994 Gerard Basset, MW, MS and recent OBE. He sold it off in 2004 but they have continued on in their philosophy of focusing on wine and affordable luxury.

I had lunch at the first Bistro du Vin in Clerkenwell earlier this week and love the ambiance of the joint. Dark wood floors, a line of banquets decorated with photos of the Smithfields market and surrounding area and a wraparound bar around the kitchen where you can watch the chefs whip up your meal or grill your steak on the Josper grill.  A special feature of the place is the line of enomatic machines that line one wall as you walk in from the bar. They have about 20 wines by the glass in there and are changed frequently so guests have the chance to try a whole range of wines. From Ch. Palmer 98 to 0’6Suckfizzle Semillion/s.blanc to a Portuguese red, there is something for everyone. The restaurant is split in two with one side having a bar/lounge area where you can have a cocktail or two before sitting down. 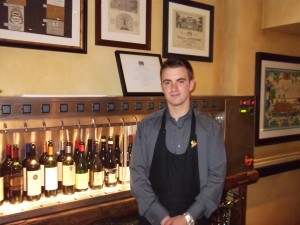 I asked the sommelier, Pierre Pattieu to pick my wines for me, just to see if he was up for the job. Pierre comes from the Hotel du Vin in Cambridge and is taking over from sommelier Romain Auderie who is moving over to the new Bistro du Vin opening in Soho next week. Pierre asked me what I preferred and I said, I prefer French or Italian and first up is a tomato and mozzarella salad.  So, of course he brought me a gruner veltliner! I did enjoy it very much as gruner is a great food wine. The Wiengut Stadt Krems Lossterrasen 2010 was a winner. Pure and clean with lovely mineral notes, a good body and slight peppery edge went down well with the olives and tiger stripped tomatoes in my salad. I asked Pierre why he brought a gruner and he said he thinks that Austrian wines are very of the moment and they’re not only interesting wines but also good value. 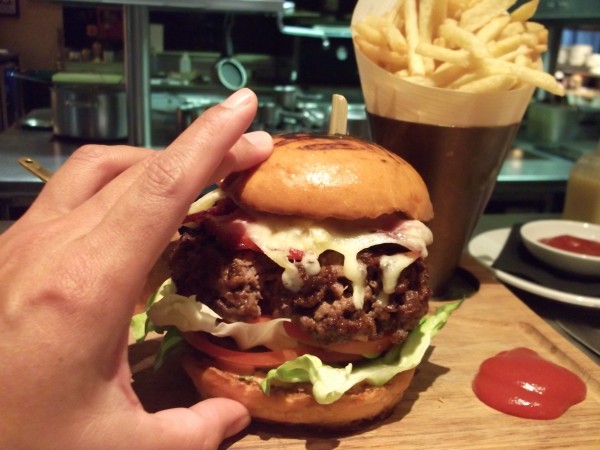 Next up was possibly one of the biggest burgers I’ve ever attempted to eat. See picture. A beef, handmade and bursting with flavour, this was a good burger. I’m always complaining about how you can’t get a decent burger in London but I think Bistro du Vin does a pretty good job!My favourite bit was the side of house made 1000 Island Dressing – ah, a childhood favourite. The Head Chef at Clerkenwell, Andy Holmes was there to answer my questions about the food and even showed off some purple potatoes that they have especially for the restaurant. 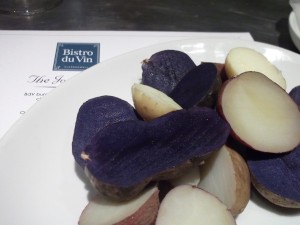 I put Pierre to the test again and this time he brought a red from the Languedoc, the Domaine de la Grange des Peres 2007. A syrah/cabernet sauvignon blend, smooth and elegant with some peppery notes over the black fruits, still quite a savoury wine. I liked it but asked him for

something a bit fruitier. He handed me a glass and I inhaled deep, intense cigarbox, leather and minty notes. A well balanced wine with rich intense flavours, there was still plenty of deep dark fruits in this wine but I’d say it was more on the backfoot rather then on the forefront. It turned out to be a wine from Martinborough, New Zealand, the 2007 Dry River syrah.  Those Kiwi syrahs are something else, incredibly smooth and elegant but having a real depth of flavour. Did it go better with the burger? Yes, I think it did.

One wine that caught my eye was a viognier from the Principaute d’Orange, although they had plenty of other interesting wines on the list. I didn’t get the chance to try it this time around but they do sell it by the glass and next time, I intend to try it.

After lunch, I had a quick mosey round the private dining room which faces the street and is bordered on one side by a wall of wine and on the other side by the meat locker where you can see your future steak patiently dry aging.

The Clerkenwell branch is the first to open in London but not the last. As a matter of fact,  Bistro du Vin Soho at 36 Dean Street is opening next week. I can’t wait to see what they have on their list! Pierre said that they will be featuring wine and cheese pairings,can’t wait. In the meantime, if you fancy a bistro atmosphere, interesting wines and good food, head over to the Bistro du Vin in Clerkenwell.