Paris comes to London,winetasting at The Dorchester with Le Meurice

Walking into The Dorchester, I was on time for once. No, I was early! And why was I early? Well, when Le Meurice of Paris says don’t be late on the invitation, one does not want to risk being left out in the cold.

Le Meurice is part of the luxury hotel group, The Dorchester Collection and the Head Sommelier of Le Meurice was in London to give us a taste of their monthly wine tastings, held on the first Tuesday of each month. This being Le Meurice, it’s not any old winetasting but a tasting led by Estelle Touzet, the aforementioned Head Sommelier paired with canapes created in conjunction with the hotels Executive Chef, 3 Michelin star rated, Yannick Alleno. They call it Les Nocturnes du 228 because the hotel is located at 228 rue de Rivoli and the event is held in the evening, obviously. 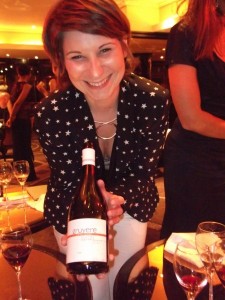 Estelle was extremely friendly and easygoing, full of information about all of the wines we tried as well as the food paired with it. Originally from the Loire Valley, Estelle started out in the kitchen before switching over to be a sommelier. She told us that she and Yannick work closely together so that each pairing is a seamless mouthful. Where does the wine end and the food begin, is the question.

As Estelle is French and the hotel is in Paris, I thought all the wines would be French but I was wrong. Estelle is a young, adventurous sommelier and she likes to push the boundaries of the wine world. She has not only an extensive list of French and European wines on her list but also goes out to find new and exciting wines from Australia, America and New Zealand amongst others.

We blind tasted four wines, 2 whites and 2 reds, along with 4 matching canapes. Estelle would give us hints and try to draw us out but even us seasoned wine pros were hesitant to begin shouting out names and places but after the first wine, we all loosened up a bit.

The first wine was a delightful sauvignon blanc from Austria ( I told you Estelle is adventuous), the Weingut Erich and Walter Polz, Therese 2009. I loved it! Weighty but very distinctive and fresh, lasting minerality with precise citrus notes and flavours and a hint of gooseberry.  Paired with Ahi tuna tartar with ponzu and yuzu drizzle, it was heaven, the wine highlighting the ponzu and  and the oily tuna bringing out the fruit in the wine. It was truly a delicious mouthful.

The next wine was a bit trickier, having a very ripe nose- almonds, extremely ripe fruit almost to the point of being off, spices and a slightly  oxidized note. I thought it might be a natural wine or a sherry. I was wrong. It wasn’t a sherry and although it was not a natural wine, the winemakers do follow organic and biodynamic principles. It was from the Collioure region of France, better know for their red wines then whites. I didn’t care for this wine. 80% grenache gris, 10%grenache blanc and 10% vermentino, the Coume del Mas, 2009 Folio was full bodied and slightly had a sweet candied orange note to it along with a nutty, bitter finish. Quite a few of the others enjoyed it but it was just too bitter for me even with the lobster and cromer crab with broad bean mousseline and ocean spray, I could easily give that one a pass. Although it was interesting to try, I’m not in a hurry to try another.

The first red was a bit familiar and while Estelle was pouring, I was tasting. Smoky, earthy notes, deep cherry fruit notes on a medium bodied yet intensely coloured wine was yelling out, NZ pinot noir to me. And it was. The Felton Road Bannockburn 2009. An excellent Central Otago pinot noir. I do love those Otagoans. Paired with poached fillet of beef with black pepper celeriac remoulade the wine brought an extra dimension to the food, the delicacy of the beef and the fine tannins working together wonderfully. I could have had a few more of that canape. 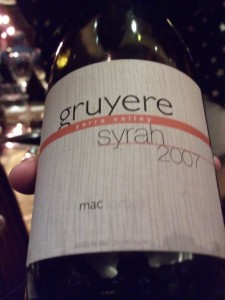 The last wine was a big surprise. Savoury, intense, fine plush tannins, fresh black fruits and peppery notes on the finish were all pointing to a syrah or Rhone vally wine. Nope. Estelle had fooled us again, this time with an Australian syrah, yes, syrah not shiraz. Mac Forbes’ Yarra Valley 2007 Gruyere syrah was a beauty, as the Ozzies like to say. Unlike any other Australian syrah I’ve ever had, subtle and fine rather then a brutish shiraz that one so often encounters from Australia.  Forbes is a young winemaker who went back to his homeland after a stint in France to make wines that reflected what the grapes can do. This wine was a big hit with everyone and served with noisettes of lamb with feta cheese, tomato and basil, made a very complimentary pair, the spiciness of the wine coming to the forefront.

Estelle picked the perfect wine to end the evening as we were all abuzz about it and she also gave us a chance to look back at all the wines. I think we all learned something new that evening and Estelle was a lovely host. I asked her if she conducts her tastings the same way in Paris, going from table to table to chat with guests and she said that she spends most of her time at the tastings flitting from one table to the other. Her aim is to be a guide to wine not a lecturer and she wants each person to discover wine on their own terms.

A fabulous, informative evening, Estelle will be conducting her next wine tasting on Tuesday, 8th Sept and it’s going to be all about syrah! The tastings are 90 euros per person, are open to non-hotel guests and are held at Le Meurice in Paris. If you happen to be in Paris and fancy interesting wine pairings along with Michelin starred food, Estelle at  Le Meurice is your go to person.

For reservations and dates in November and December, please contact the hotel:

4 thoughts on “Paris comes to London,winetasting at The Dorchester with Le Meurice”