Jefferson Winery, after the WBC11

“Can I come along?”  The 2011 WBC had just officially ended and I was hanging around the hotel lobby when I heard Liza of Brix Chix and Melanie of Dallas Wine Chick talking about visiting a winery that afternoon. As with most out of hours events at the WBC, if you didn’t invite yourself along, you ain’t going. Luckily, we bloggers are a friendly lot and besides, Liza drank all my English fizz at the last WBC I attended back in ’08 so I felt I was entitled to invite myself. 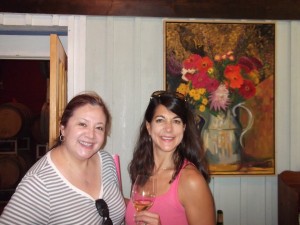 Liza and Melanie at the winery

During the winebloggers conference we had a series of wine speed dating events and one of the wines that caught my attention was from  Jefferson Vineyards. No relation to ol’ TJ but the vineyard is situated on the very same hills that Jefferson thought would be most suitable to grow grapes. First planted in 1774, that pesky War of Independence (or that “spot of bother in the Colonies” as the English refer to it) got in the way and the fields were left alone until 1981 when they were replanted with pinot gris, chardonnay, viognier, merlot, petit verdot and cabernet franc.

Andy Reagan, chief winemaker at the vineyard, had invited any stragglers left after the conference to head over to the winery for an informal lunch and tasting. The winery is a small operation but they seem to be doing pretty well, with a cute little tasting room plastered with newspaper articles lauding their wines.

Andy and the well rested steaks

The wine barn/cellar doubled as the setting for our tasting and what better way to be greeted then by a winemaker with a few big slabs of steak in hand. While the steaks were resting (it’s hard work being a steak), we got to try some of the wines. Andy’s intention is to make a bottle of wine to relax and enjoy and he scored a hit with one of my favourite’s the 2007 Jefferson pinot gris, an elegant, full bodied mouthful of ripe peaches and lime notes. I really enjoyed this wine by itself and once the chicken salad came out, was loving it even more. A versatile wine, good with or without food.

Virginia is claiming viognier as it’s flagship white and of course there was one to sample. Jefferson seems to really excel at those white wines. The 2007 was a beaut, full on tropical nose with a slight oiliness in the mouth, well balanced with lots more tropical fruit and almond flavours on the palate.

The reds did not fare as well. They just didn’t seem to come together as well as the whites. I found this to be true of many Virginia red wines except for cabernet franc, which funnily enough has been chosen as the flagship red grape of the States. Cabernet franc seems to have found it’s place in the hills of VA. The Jefferson cab franc, while not a herbaceous mouthful was ripe and minerally, a good companion to the steak.

Jefferson Vineyards produces roughly 6000-8000 cases a year but they are definitely a boutique winery worth searching out. If you happen to be visiting Monticello, Thomas Jefferson’s old home, pop by the  Jefferson winery and try the pinot gris.