The Angel and Crown is a new gastropub just re-opened in St. Martin’s Lane. A stones throw from Covent Garden, Trafalgar Square, ENO and numerous West End theatres, it’s in a great location and not only pulls a good pint, they have also redesigned the pub so that the upstairs is now a snappy dining room.

The pub was taken over by The ETM Group and has been transformed from an old fashioned boozer into a cozy gastropub. The upstairs dining room is compact but not crowded and has a small bar to cater to diners.

The menu is full of British seasonal foods and specialities. I was invited to dine by ETM and they had devised a menu to show off the cuisine. While we were waiting for everyone to show up we had pork crackling, black pudding Scotch egg and devilled whitebait to nibble on, all available as bar snacks and ranging in price form £3 – £6.50. I loved the Scotch egg, black pudding is one of my favourites and wrapped around the egg, was delicious. We had London Bellinis (pressed apple and elderflower topped with Prosecco) to sip on while waiting, a bit on the sweet side for me, I asked for extra Prosecco! 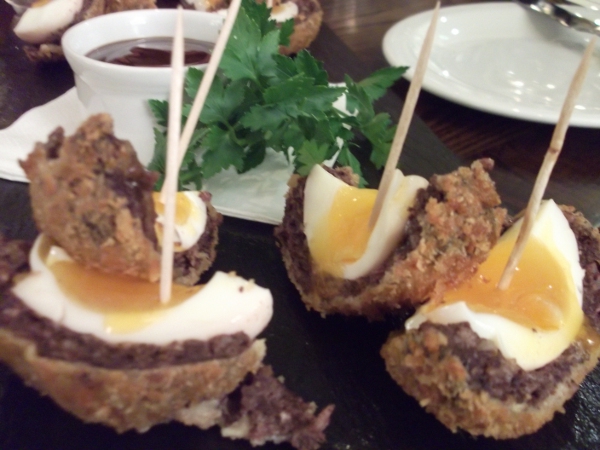 One of the things they aim to do is to bring the wine list out of it’s ghettoized existence and actually have wines that you’d be happy to drink, not just watery pinot grigio or a fruit bomb of a cabernet.

The first wine we had was surprisingly, a German riesling. Riesling gets a bad rap but the Dr. Burklin Wolf trocken 201o is as dry as they come. A delightful nose of orange blossom, beeswax and white flowers with a bit of passion fruit, on the palate it’s dry but fruity, candied lemon, passionfruit and lime leaf finishing it off. A fantastic match with the potted smoked mackerel and dill, the wine cut right through the mackerel and left me wanting more of both but eat the dill pickle on it’s own, otherwise a winner!

At first I thought the main course might just be a bone but it was actually a pheasant and partridge pie garnished with a big ol’ bone marrow sticking straight out of the middle of the plate. If you like bone marrow, this is the dish for you. The pie itself was very tasty, a light and flaky pie crust covering succulent pieces of pheasant and partridge in a fatty broth. It was paired with Chateau Musar’s Jeune 2009. Ch. Musar usually age their wines for 7 years before releasing them but the Jeune is their effort to produce ready to drink wines. A savoury and gamy wine, it was a good wine to have with the dark meat pie, hints of black fruits and licorice on the back of the palate.

I do have to give a special mention to the poppy seed onion rings, they were divinely crunchy with sweet onion on the inside. I did end up eating a bowl of them by myself.

Dessert of chocolate mousse was decadently rich and after all those onion rings, I could only manage a few spoonfuls. Pedro Ximenez, La Gitana was served alongside it but I think the Pedro would have been better poured over a scoop or two of vanilla ice-cream. Still, it’s nice to see it available outside of a sherry bar.

I’ve eaten at a couple of EMT’s pubs now and not only is the food well done but the winelist, although not extensively long is well thought out and hopefully will shake people out of the wine ghetto they’ve come to expect from pub wine lists.

Know a pub with good grub? Leave your recommendation in the comments section…