“Love. Exiciting and new. Come aboard. We’re expecting youuuuu. The Looooooooove boat….” It’s amazing but I can still remember the words to that cheesy 80’s sitcom set on a cruise ship. And much like the 80’s, cruise ships have always seemed a bit cheesy to me.

That is until I was introduced to Celebrity X Cruises the other night at Vinopolis. If, like me, you’ve never bothered to find out more about a cruise experience, prepared to be surprised. Apparently, they are gigantic floating hotels/spas/world class restaurants with lux amenities. Celebrity now features fine wine and dining on all it’s ships and gone are the days of shrimp cocktails and sausage cocktails. The ships are also looking pretty flash nowadays, too.

I was invited to a dinner at Vinopolis to learn about Celebrity’s new food and wine cruises that they are introducing in the Autumn. The cruises are going to be co-hosted by Oz Clarke and Vinopolis’s Tom Forrest and will feature stops in various wine regions, including, Portugal, Spain and France. 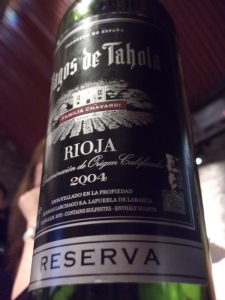 The dinner we had was representative of the kind of food and wine matching meals that would feature on the ship. We started off with an English Sparkling wine, the Ridgeview South Ridge 2008 traditional method, which was really good with the canapes. I was a bit surprised as I’d had it a few days previously and wasn’t all that keen on it but it seems to go well with food.

Served up with the starter of goat cheese tart and beetroot, we had a white Bordeaux,  a 2004 Rioja reserva, Pagos de Tahola, was paired with a perfectly grilled steak and a 2007 LBV port with chocolate fondant was heavenly.  Happily a cheese board was served up paired with a white wine from the the south of France, the Grand Reserve de Gassac blanc 2010. An interesting choice to have with the cheeses (Cheshire Blue, Brie de Meaux, Epoisse) and for me, they didn’t match. While some people like the wine to contrast with the food, I did not find the pairing enjoyable or cohesive in anyway.  I would have preferred a sweeter wine or even a port but now I know that wine would be better served at some other point in the meal. And with wine, everything is subjective, some people quite liked the match. 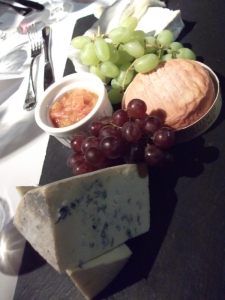 To finish off the evening, Celebrity brought in some on-board entertainment in the form of an a cappella group, the Aquadinos. A barbershop quartet – like group who wowed us with their versions of doo-wop classics. Great fun and a great way to end the evening. For more info about the Autumn wine cruises with Oz Clarke consult the Celebrity Cruise website.

5 thoughts on “Celebrity Cruising at Vinopolis”