I’m quite familiar with the wines of Navarra, they’re all about rosé wines, right? Yes and no. Turns out there’s a lot more to the region then their robustly coloured rosado wines.

The Wines of Navarra were in town last week to promote the region and give, me at least, a taster of their wines. Turns out they have been producing wine for centuries, going back to the 10th century and their wines flourished throughout Spain for many years in part thanks, to their position on the Pilgrim’s Route to Santiago de Campostela, Navarra being identified with their rosado wines made from the garnacha grape.

I do like the rosados of Navarra – full bodied and spicy, brightly coloured but dry, these are certainly not your wimpy, sweet California Blossom Hill style rose wines. That’s probably why I like them, wines that were made to quench your thirst as well as be served up with a rustic meal of jamon and cheese with a hunk of bread on the side.

I found out though, that since the 1990’s Navarra has undergone a sea change in wine making, not abandoning the rosados but adding international grape varieties like chardonnay, cabernet sauvignon and merlot. What was most interesting was that these grape varieties had existed in Navarra in the past due to the large French influence of Bordeaux winemakers in the 19th century but had been lost when phylloxera hit the region in the late 1800’s. They still of course grow the traditional viura, tempranillo and garnacha but now are able to blend in the international varieties if they so desire.

I tasted a chardonnay/viura blend, full of tropical fruit but having a nice dry finish as well as discovering the latest addition to the region, sauvignon blanc. I spoke to the Consul General of the region, Jordi Vidal, and he told me that sauvingnon blanc is the next big thing in the region. He cited the milder climate of the region which produces good acidity and floral aromas in the wine as to why sauvignon blanc is  doing well there. I did try a few sauvignon blancs and they definitely had good acidity and loads of citric flavours, I’m not sure if I would pick it out as a wine of Navarra. 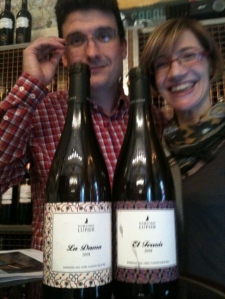 What I found much more to my liking were the old vines garnacha wines that were on display. I tried one from producers Domaines Lupiers made from vines that were between 80-100 years old. The owners, Elisa Ucar and Enrique Basarte found the old vines and rather then grub them up, decided to make old vines garnacha. They only make two wines, El Terroir and La Dama. Elisa told me that the 2008 La Dama is made form over 30 different garnacha base wines blended into one, full and rich with great minerality and a savoury quality being very well balanced and showing great complexity. A great wine and the price is reflected in the £28 price tag.

Navarra has been making wine for centuries but it’s great to see these dynamic new producers carrying on the wine making traditions as well as looking to introduce new grape varieties to the region. One distinct advantage that the region has is that they are, in general, producing reasonably priced wines that are good value for money.

One thought on “Wines of Navarra, more than just rosado wine”