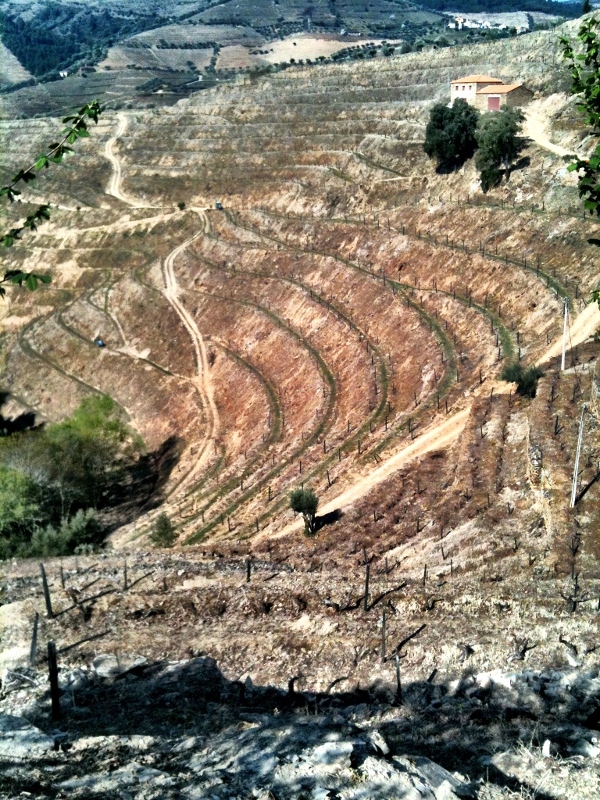 Bouncing along the dirt road, we slowly wound our way up and down the hills of the Douro Valley to get to Jorge Serodio Borges newest project in the Vale de Mendiz, the revitalization of Quinta da Maneula. Jorge is the winemaker for Quinta Passadouro but alongside that he also runs Wine & Sol with his wife, Sandra Tavares, wine maker for Quinta do Vale d. Maria. They make the Pintas label red wines and the fabulous white wine, Guru, which I had sampled earlier in the year at the annual Essencia do Vinho event in Porto, Portugal. 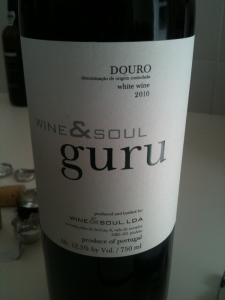 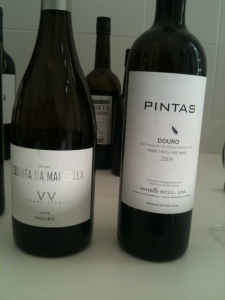 Quinta da Manuela, though, is a family project. Jorge inherited the quinta and set out to discover what he could do with the vines. The vineyard consists of 14 hectares but the vines are 80 to 100 years old and they are producing a Vielles Vignes red wine, only 3,000 bottles are produced a year and we were able to try the latest vintage, the rechristened Quinta da Manoella 2009 VV. It is a  field blend, which is commonly found in old Portuguese vineyards. Jorge explained that field blends were the norm many years ago because of disease. The growers just planted as much and as many as they could in the hopes that something would survive to be harvested and made into wine. He estimates that there could be up to 30 different varieties in the blend. The wine was impressive, concentrated and complex, very aromatic with and intense nose of black fruit and licorice. Finely balanced, a fresh and elegant wine with finesse. It is fantastic what Jorge and Sandra have coaxed from the old vines. 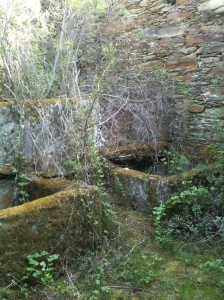 As we drove up to the old warehouse, Jorge pointed out abandoned one family houses/wineries that littered the valley slopes. In the past, it had been the custom to attach a small winery to the family house. We stopped at one to see the tiny moss and leaf covered lagars that had almost been overtaken by the forest. The sturdy stone walls of the houses good for another thousand years, although the roof was long gone. We continued on to the newer site and Jorge showed us around his property where workmen were busy working on the tasting room and winery. The buildings still looked like very much a work in progress but Jorge assured us that everything would be ready in the near future.

Jorge had a special surprise for us when we got to the old warehouse. Pulling out a massive old iron key, he unlocked the door and we stepped into a dusty warehouse with dirt floors and the roof practically falling-in  in one far off corner.  Our way in was blocked by old wooden barrels of various sizes, some still holding wine. Tucked away in a back corner was Jorge’s prized barrels – barrels of port that were over 100 years old. Jorge had discovered them when he inherited the property and had been carefully watching over them. He told us that the last time he had moved the barrels was about 15 years ago. He does however taste them on occasion and today was one of those days. It was almost unbelievable that we were going to get to try 100 year old port from the barrel but that’s exactly what occurred.

Jorge siphoned out a bit and we took it outside to have a look and taste. Here is short video (I know I accidentally posted it recently as a stand alone video so you may have seen it already)  –

Jorge is thinking about making a tawny with that 100 year old port, here’s hoping!