A flying visit to the Sicilian winery Donnafugata 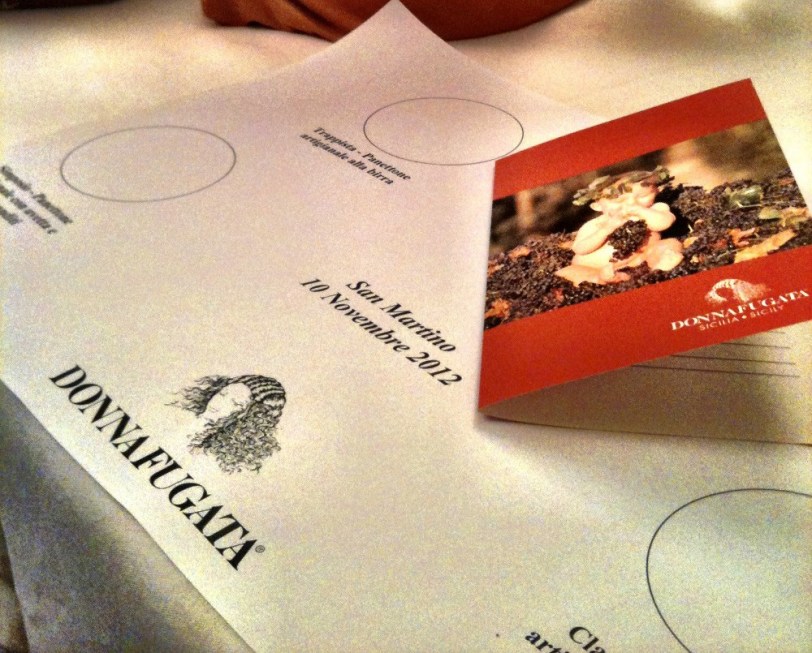 Donnafugata literally means “woman in flight” and it is inspired by the flight of Queen Maria Carolina, who fled Naples ahead of Napolean’s troops in the early 1800’s. She sought refuge in Sicily where Donnafugata’s vineyards now sit, and that is how the image of a woman with windblown hair became their logo and the winery got it’s name. 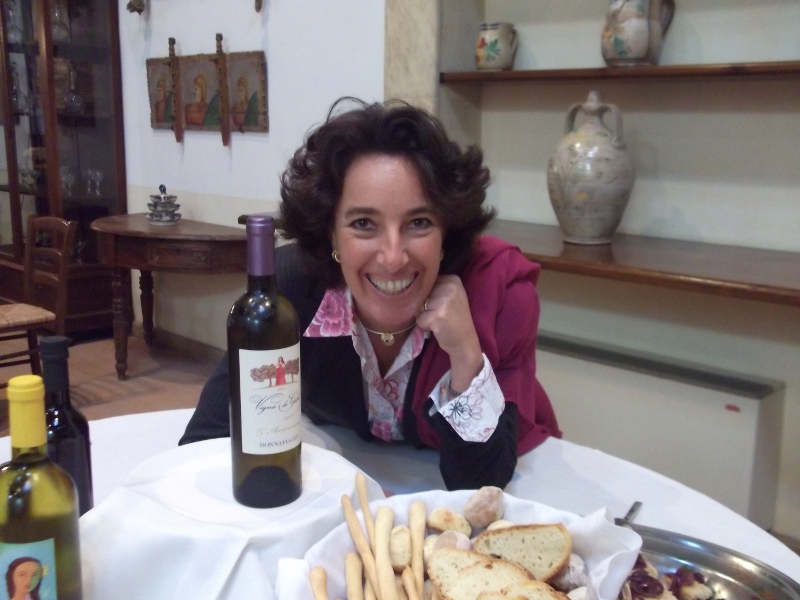 The same description could be used to describe José (with a hard J) Rallo, daughter of the founders Gabriella and Giacomo Rallo, she is a whirlwind around the winery. Together with her brother Antonio, they are steering the winery into the future with many new initiatives and programs. There is a lot more to Donnafugata then just wine, although they have become quickly recognized for the high quality of their wines over the past 30 years, they also have a thriving vineyard visitors program, a partnership with a local restaurant  that specializes in using local produce and support a pannetone baking operation in a Paduan prison. They certainly don’t stop.

They have 2 separate vineyard sites and the main winery in Marsala. One vineyard, is on the island of Pantelleria where they have an ungrafted vineyard of Zibibbo which is over a hundred years old. It’s from this island that they make their sweet wines. The pannetone made by the prisoners of Padua is made with their Kabir Moscato di Pantelleria DOP. The chef of the prison bakery gave us a talk on the production of the pannetone and how much support Donnafugata has given them over the years. The bakery started out making a few hundred pannetone and now produce over 60,000 a year, all handmade, each batch taking over 70 hours to make. After the talk we got to try the various pannetone including the Kabir laced one. They were the best pannetone I’ve ever had, soft, moist and fluffy – not like the usual dry as sawdust pannetone you get here in London. The Kabir itself was fresh and full of honey, melon and orange sweet flavours and aromas with plenty of acidity. 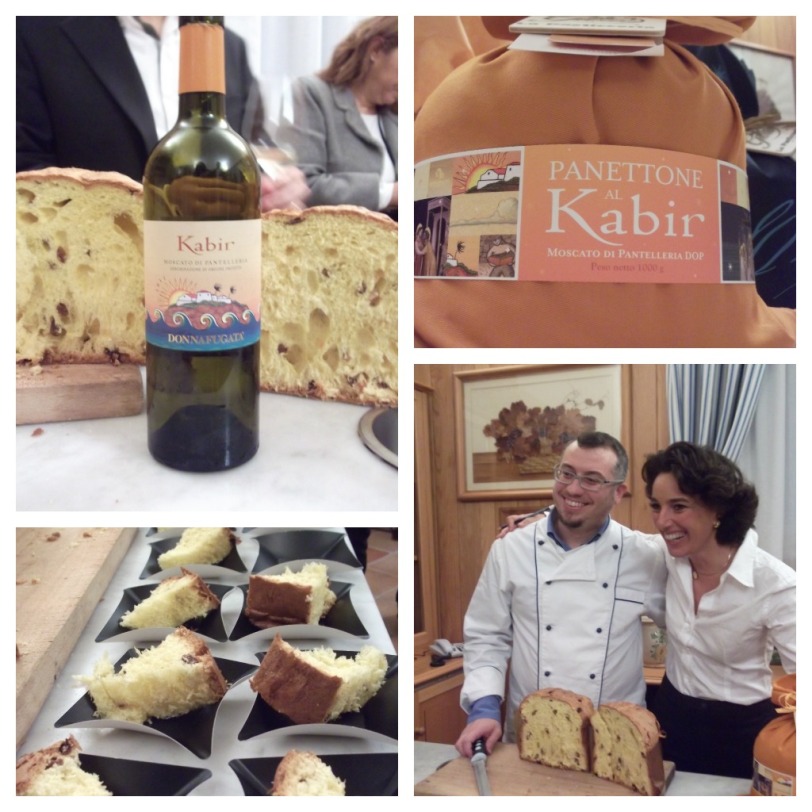 Lunch was another affair to show how Donnafugata is working with local producers and supporting the region. They have partnered up with Restaurant Le Lumie and it’s chef Emanuele Russo, to create an Autumn menu, using local ingredients. Donnafugata of course pairs the wines with the cuisine. We were treated to a variety of local food, including orange salad with anchovies (very good!), sheep ricotta, couscous salad and roast Nebrodi pork, which is a wild pig that lives off acorns. The two standout wines of the lunch (though they were all good) was the Mille e Una Notte 2007 from the Contessa Entellina DOC and the Ben Rye 2010 – Passito di Pantelleria DOP. The Mille e Una Notta is primarily Nero d’Avola with a small percentage of other grapes. The 2007 was smooth and rich, a delight to drink. Donnafugata’s Ben Rye, a passito, was very aromatic, apricot, fig and honey on a very fresh palate. I could have spent the afternoon drinking that one! 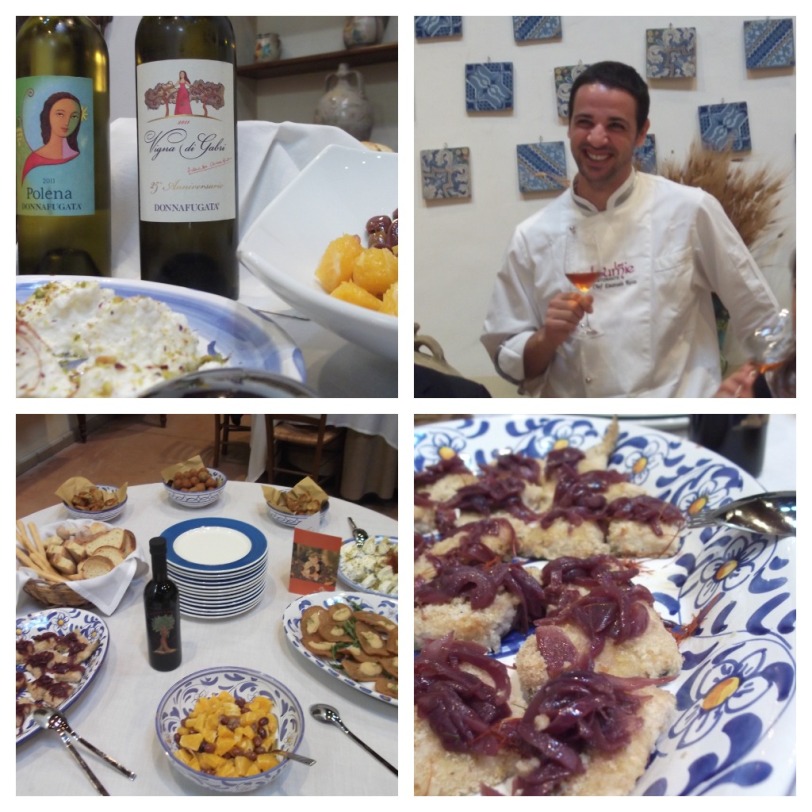 However, we had a vertical of their flagship wine, the Vigna di Gabri. Named in honour of Giacomo’s wife, Gabriella.It was she who originally worked with the Contessa Entellina vineyards striving to produce fresh and vibrant Sicilian wines. The purpose of the tasting was to show that Sicilian white wines can age. The first vintages were made of the native Sicilian variety Ansonica but later vintages have chardonnay and since 2010 they have also blended in viognier, sauvignon blanc and catarrato.

The 1998 Vigna de Gabri was a delight, far from being over the hill and flabby, it still had great acidity, and plenty of flavours, a wine that was very much alive. It proved that Sicilian white wines can age very well.

The 2002 had more oak on the nose and palate with a pronounced spicy nose and palate, in general it was also far more savoury and mineral laden in character. 2002 was a good year in Sicily unlike the rest of Italy which was very wet.

The 2006 was the year they started to add chardonnay (20%) to the blend and the chardonnay gave the wine a ripe, white fruit character with a bitter lemon finish, still a very good wine.

The 2007 is still young with very fresh fruit notes and the oak is not as integrated as it should be. I’d say give this wine another year or so.

The 2010 was the first year they added the other grapes and I think they do give the wine more complexity while it still retains it’s vibrancy and hints of saline also came out on the palate. It will be interesting to see how this blend develops.

The last we tried was the 2011, very young with a slight honeyed note which I hadn’t noticed on the previous vintage. It’s had a distinct mineral note to it, I could almost feel the rocks in my mouth. I’d definitely like to revisit this blend in a few  years time. 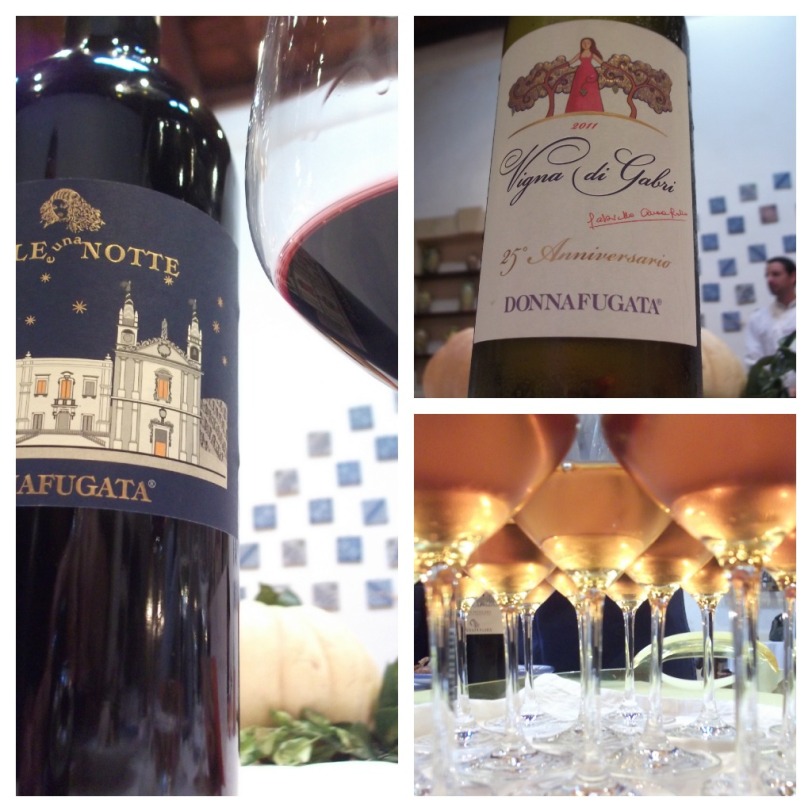 After the vertical it was time for the fete. This is the 3rd year Donnafugata has opened it’s doors to the public for an end of harvest fete. They featured local cuisine, including just made ricotta – which they called “Ricotta Live”. I’ve  never had freshly made ricotta, it was a unique experience to be served it warm from the cauldron. There was also a local Sicilian folk band wandering around and of course plenty of Donnafugata’s wine to try. 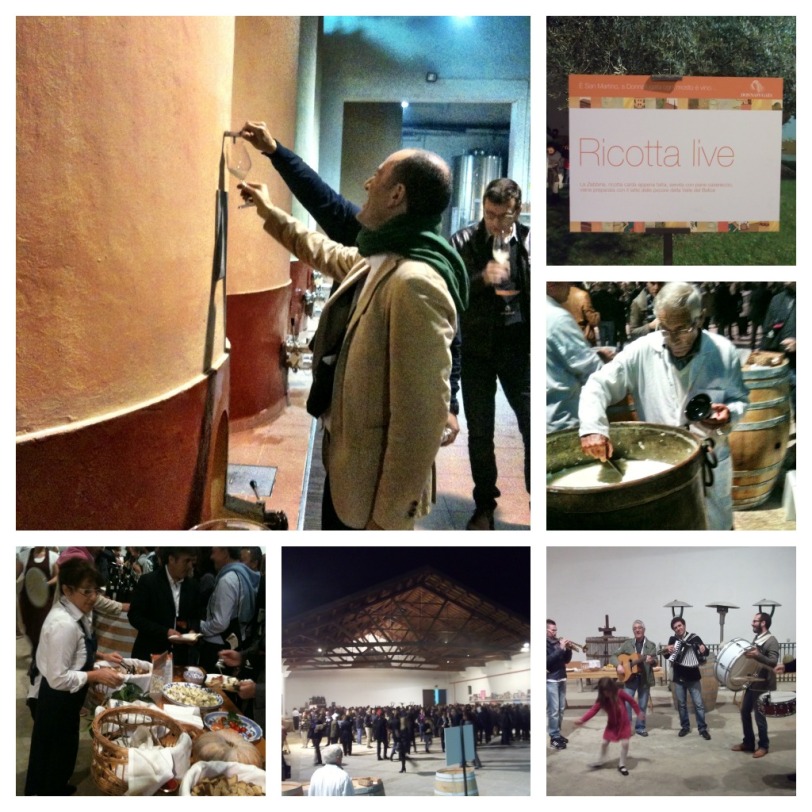 It was great fun and the Sicilians are very hospitable hosts. I had a fantastic time visiting the winery and hope to visit the island again in the Spring. There is a lot going on in Sicily and I didn’t even get to try the Marsala! Well, there was a nightcap on my bedside nightstand waiting for me when I got back to the hotel but I’d love to go back and learn more about the wines of Sicily, both fortified and table wine. 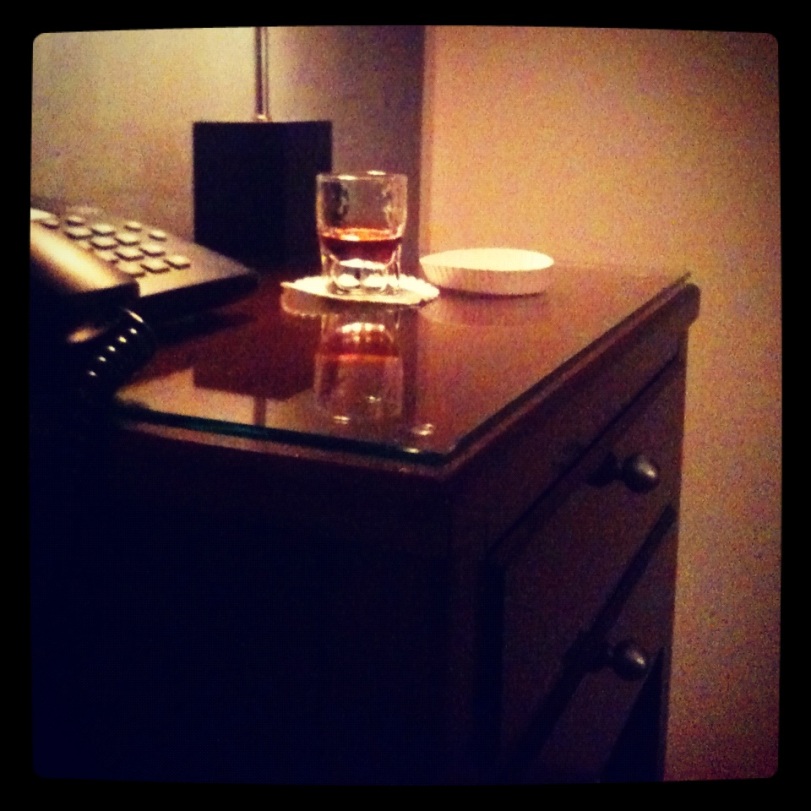 and so to bed with a nightcap of marsala….

A big thanks to Donnafugata for inviting to partake in their harvest fete.