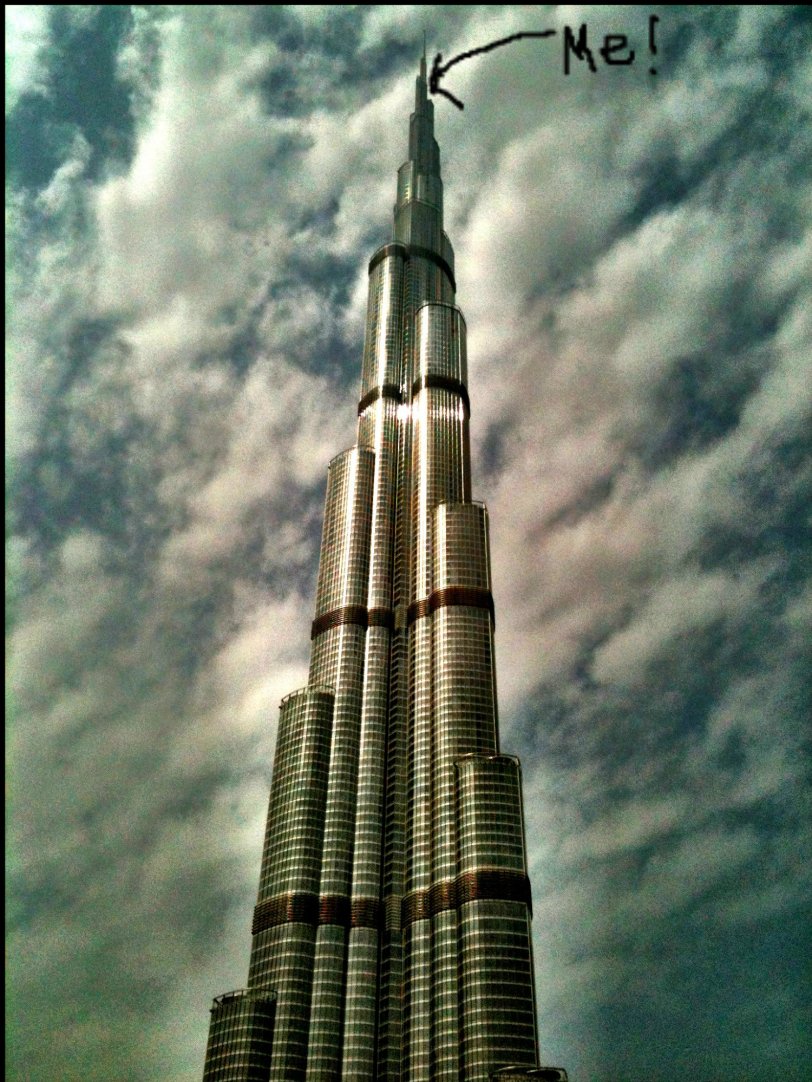 lower half of the Burj

Shooting up to the top of the Burj Khalifa, it takes less then a minute to go from sea level to the 124th observatory floor of the building. That’s about 10 metres a second but the ride is so smooth, the only thing you notice is a slight popping of your ears. When you think about it, it is a bit scary, I mean that is a loooooong cable pulling you up and back down again.

Entrance to At the Top

I was on my way to Adelaide with Emirates Airlines and to make the journey a bit less “jet laggy”, I had a 24 hour layover in Dubai. That was the idea but there was so much to do and see in 24 hrs that I really didn’t get a chance to relax…

indoor water fountain at The Address

sharks in the aquarium, reflections from the mall

First off was a trip to The Address, one of the mega-malls in Dubai that houses the entrance to the Burj Khalifa. Someone told me that going to the top of the Burj is on many peoples’ bucket lists but seeing as I’m a bit afraid of heights, I was a bit apprehensive going to the top but once I got there, the views were so amazing, I spent an hour wandering around the observatory decks both indoors and outdoors. 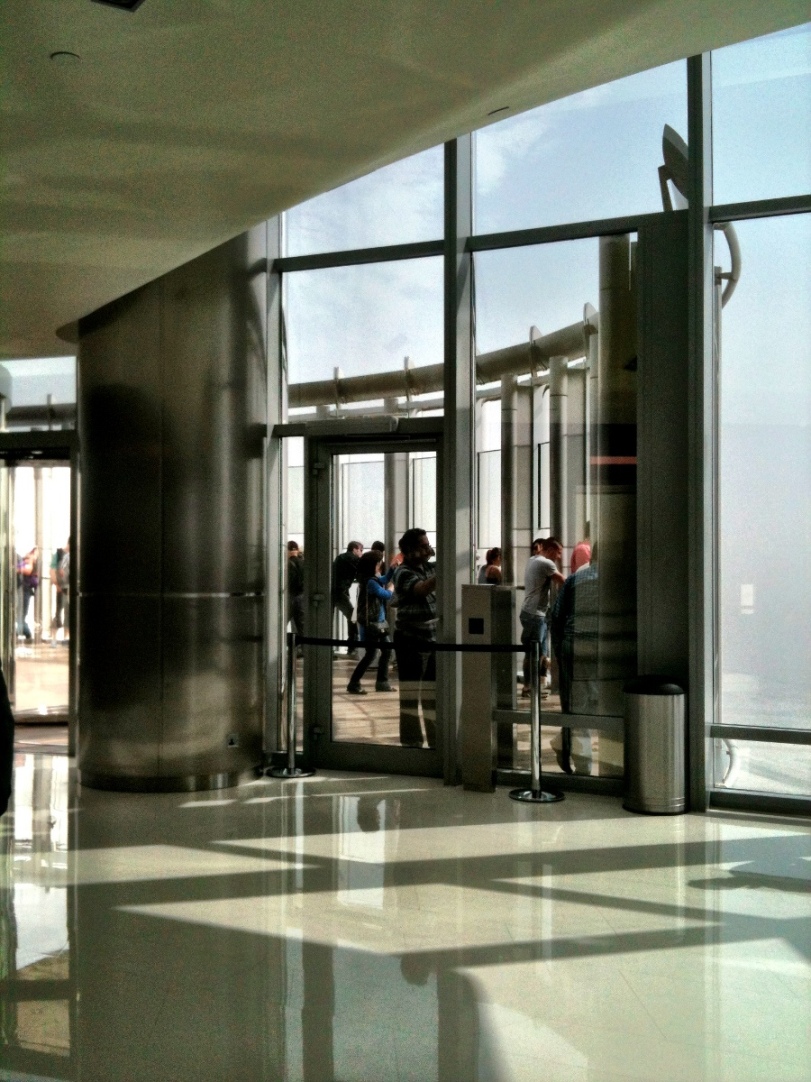 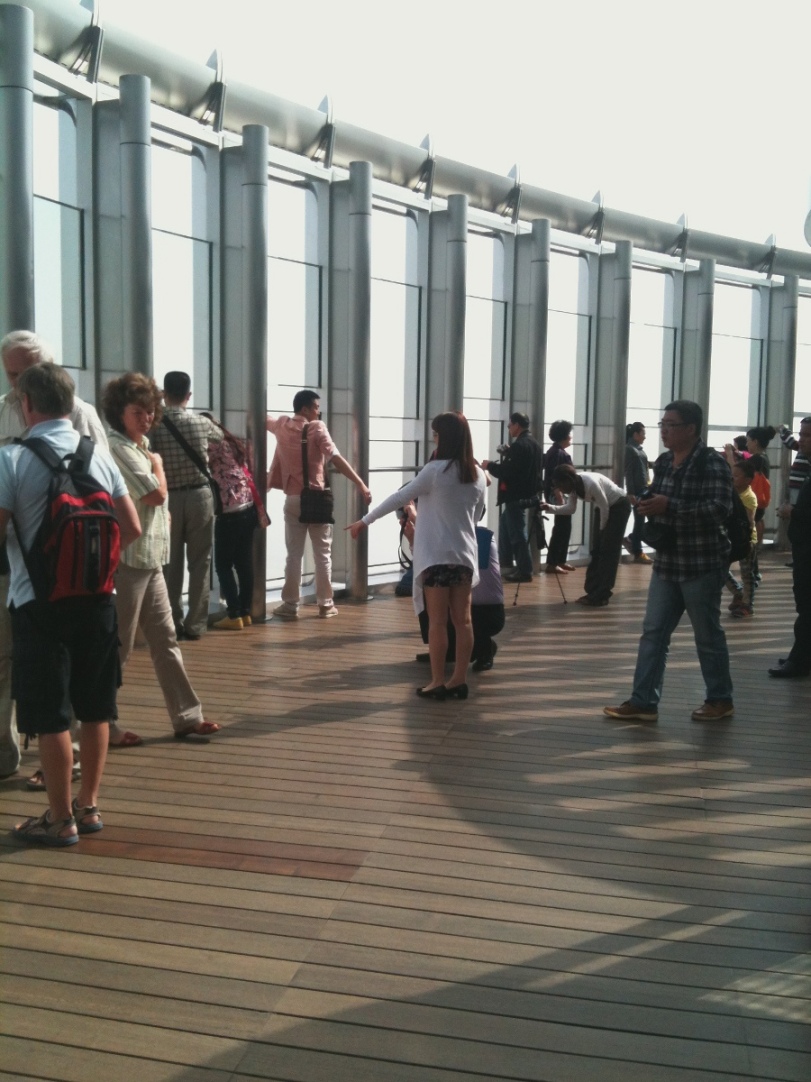 looking up from the 124th floor

Luckily, it was a fairly clear day although it was a bit hazy in the distance. Stepping off the elevator, a few steps in front of you, is the door to the open deck. However, for ‘fraidy cats like me, I could edge around the interior walls of the building before screwing up my courage to step outside.

shadow of the spire

And what a lovely day it was, being up 800 metres with the sun beaming down and a warm desert breeze blowing through the open slats that were about at shoulder height. I would love to be up there in the evening, that much closer to the stars, I imagine. 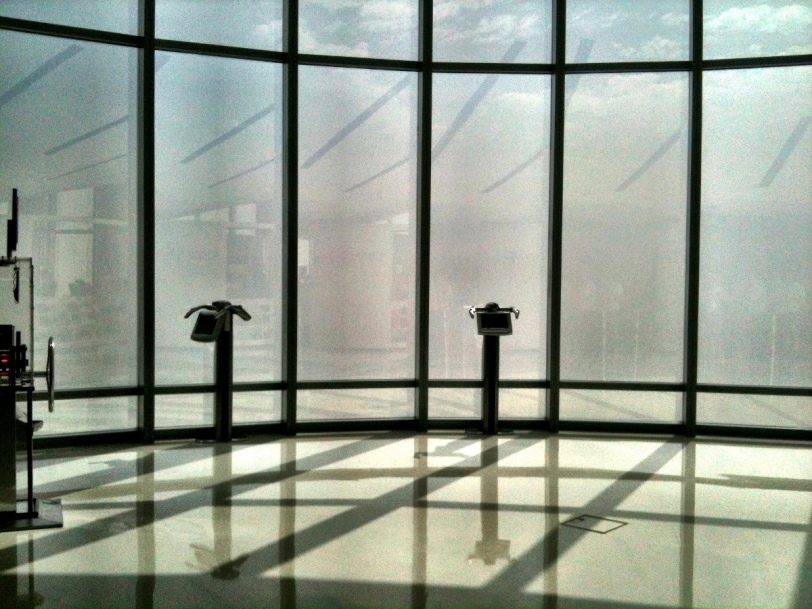 Inside, the walls are floor to ceiling windows with interactive telescopes situated at various intervals, giving you a 360 degree view of the area. The telescopes had various settings so you could see the region in the past, at night, and on a clear day. There is also a small gift shop and of course souvenir photographs of your trip to the top.

After about an hour it was time to head down and after a short wait in the queue, I found myself back at ground level. I would have loved to have spent the day up there but it was time to do a bit of exploring of one of Dubai’s famed malls. I grew up in California but these malls are impressive! The Address has an ice skating rink as well as a gigantic aquarium, along with literally thousands of shops. I was there for 2 hours and I know I didn’t see everything. If you were ever a mall rat, you’ll love Dubai’s malls.

However, lack of sleep was beginning to set in so back to the Le Meridien Hotel for a quick nap and then it was time for my desert safari. I wasn’t sure what to expect, whether I’d be on camels or  4 wheel drives. Turns out, it was 4 wheel drive with an optional camel ride at the end. I’ve been on camels before so I gave that a miss. However, the 4 wheeling was fun!

First things first, they deflate the tyres a bit so that the wheels have more grip on the sand and then we were off. It was not dissimilar to being on a rollercoaster, I found myself hanging on to the bar above the door and involuntarily yelping whenever it seemed like we were about to tip over sideways. However, my driver was great and I think he thought my reactions were quite funny.

We stopped a few times for picture ops and also, I suspect, to give me a respite from the breakneck speeds amongst the dunes. The trip amongst the dunes is quite popular and the day I decided to go, there were something like 70 other vehicles joining me. However, my guide said that usually, there are not that many vehicles on a tour.

me and my shadows

they found a good spot

Towards sunset we headed to a desert compound where we were to have a Middle Eastern dinner. It was all cleverly set up, with  souvenir stalls, henna hand painting, an area set aside for smoking houka pipes, food stations and even a bar! Beer and wine were included in the dinner which was a pleasant surprise.

henna on my hand

After dinner, there was belly dancing but I preferred to hangout on the houka rugs smoking apple tobacco which I do enjoy (I must get down to Edgeware Road here in London more often for a hooka). 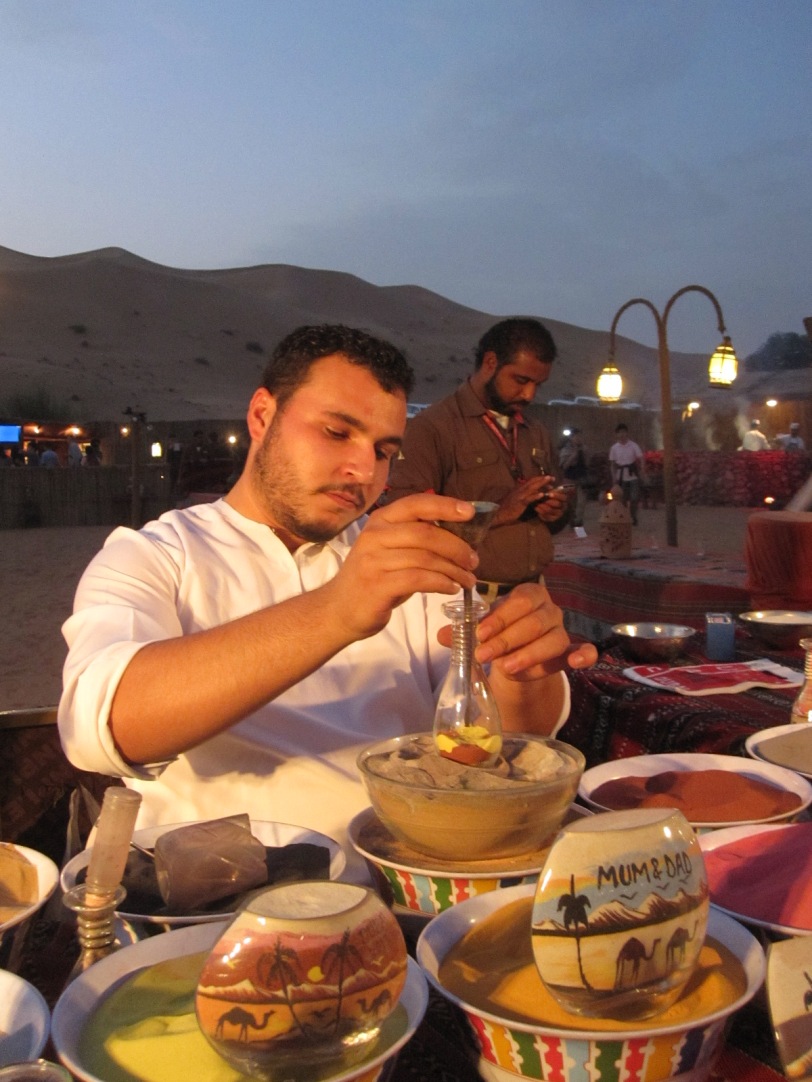 By now, it was getting late and I had a 2am flight to Adelaide to catch. So back to the hotel for a bit of sleep before heading to the airport. 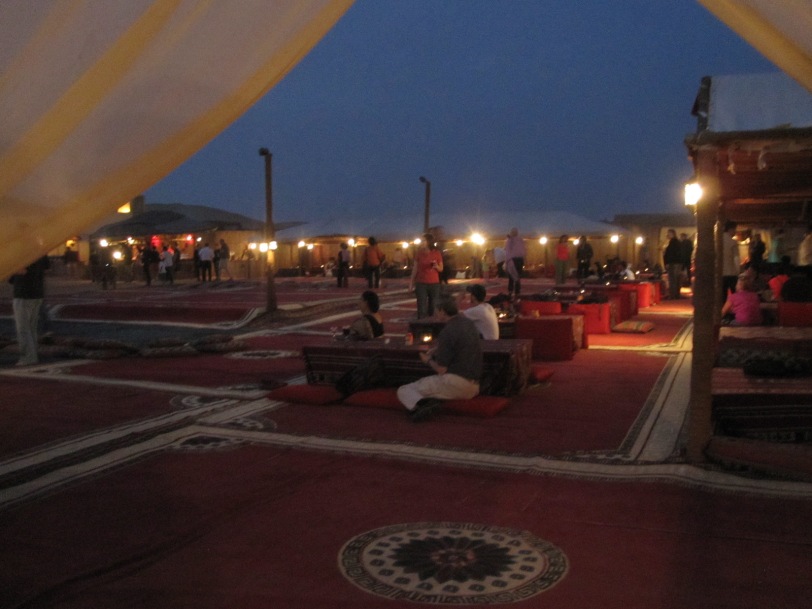 I’m really glad I was able to break my trip to Adelaide with a stop in Dubai. I would have liked to have stayed longer, I didn’t even get to The Palm or to the waterparks, or play golf, or the camel races or, well there’s lots to do there. Guess I’ll have to pencil all those things in next time.

I was flying to Adelaide as a guest of Emirates Airline who also arranged my stay at Le Meridien and my desert safari with Arabian Adventures.