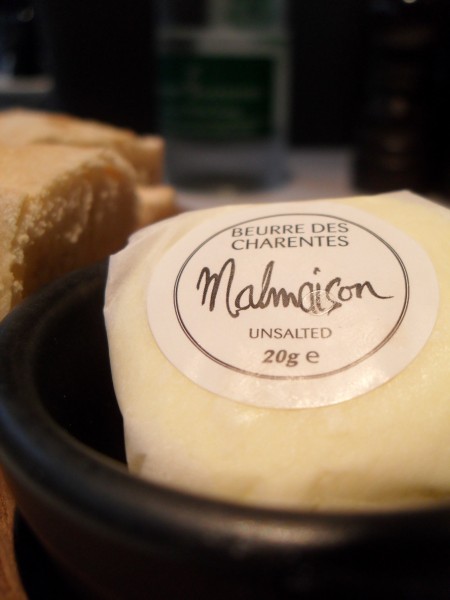 It is now midnight as I write this and I am still full. There used to be this commercial that ran on American TV for Alka-Seltzer, the tagline was, “I can’t believe I ate the whole thing”. Despite the fact we didn’t “eat the whole thing”  as a matter of fact, we both took doggy bags home, we did stuff ourselves silly.

We had 4 courses, which is not unreasonable, but there were some generous portions at the Brasserie of Malmaison. Malmaison is a boutique luxury hotel smack dab in the middle of Clerkenwell and their brasserie serves up tasty local produce all presented quite beautifully.

The main draw for me and the reason I was there, were the bespoke wine flights that the restaurant sommelier, Stuart Fife matches with your dining choices. Stuart is new to Malmaison but he comes from Hotel du Vin in Glasgow and his matches were very well done indeed. 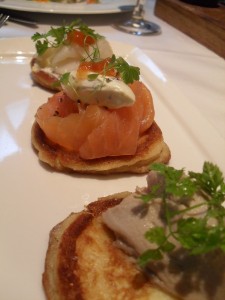 While I was waiting for my lunching partner, Vintage Macaroon to arrive, I had a browse round the wine cellar and found some familiar labels, Spy Valley, Springfield Estate, Dinastia Vivanco, d’Arenberg Stump Jump, and Chapel Down, to name a few.  As I suspected, Bibendum Wines is the main supplier for Malmaison and they had some of their best on the list.

We left ourselves in Stuart’s capable hands and didn’t regret it one bit. I had a very elderflowery, light and refreshing 2007 Bacchus from Chapel Down. I often find English wines to be a bit thin but Chapel Down make an excellent bacchus and it had enough body and elderflower/citrus flavours to match the trio of smoked blinis (haddock, salmon and mackerel pate) I had to start. The smoked fish was very tasty but I thought the blinis were a bit too soft for me, maybe blinis made of buckwheat would be better? I like the slight chewiness of them.

I almost forgot to mention the pre-entree amuse bouche of intensely flavoured crab bisque, which would have been a shame. Made from scratch from fresh crab shells, it was divine.  It came garnished with grated gruyere cheese and toast and David the maitre’d told us that the bisque is made in the “proper French way,” replete with brandy and pastis before being flambee’d and then pureed.

Of course we had to order the special of the day although I was tempted by the baby back BBQ ribs, the Brasserie does BBQ(!), we went for the Cote de Boeuf from Donald Russell. 500 grs. of bone in beef, cooked medium but a beautiful pink colour, juicy, succulent, charred perfectly, I forgot to ask them if they have a Josper, it came with a nice piece of bone marrow at it’s side as well as salad, chips and a sweet corn fritter that I just had to try. 500 grs is a lot of meat and we wanted dessert so we packed up most of it to take home, cheeky I know, but it would be a shame to throw it away.

Stuart gave us 4 different wines to drink with the steak, a St. Emilion Ch. La Croix 2007, Dinastia Vivanco Crianza 2007, Terrazas Malbec 2007 and  a 2005 shiraz from Botham, Marrow, Willis. Yes, the Botham refers to the great cricketer Ian Botham who bought a vineyard when he retired ( I didn’t know who he was but Ms Macaroon did as she’s an Aussie). The first three were very good matches despite being from vastly different wine regions. The St. Emilion, soft and round but with enough backbone and fruit to fill my mouth with vinous goodness. The Terrazas was another standout for me, very well made, although at first I thought it was a bit alcoholic, the Argentines certainly know how to make a wine for steak and this malbec had all the classic earthy, blueberry profile you would expect with hint of tobacco on the finish. I didn’t want to give it up and luckily for me, Ms Macaroon preferred the Botham shiraz so we were both happy campers. I’m very familiar with Dinastia Vivanco’s wines,  having visited them a few years ago, and their Crianza did not disappoint, full of cherries and vanilla, yet achingly dry, a classic Rioja. 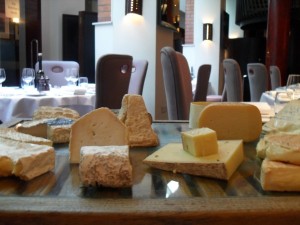 We really weren’t going to have a cheese plate  but one look at the cheeses and we knew we had to have at the very least, a sliver of 2 or 3 cheeses, served with homemade crackers. There were at least 15 cheeses to choose from, mostly French and we had a selection of 4 to go with the 1975 Taylor’s Vintage port, you didn’t think we get away with no port, now did you? A complex nose and palate of toffee, coffee, bitter chocolate, candied black fruit, I could go on but suffice it to say it was still holding up quite well. Ok, I do like a vintage port now and then, I’ll admit it (but Tawny you’re still first in my book!).

By now, I really didn’t think I’d be able to cram in dessert but 4 words did it for me: Peanut. Butter. Ice. Cream. I mean, what red-blooded American would pass that up? Served alongside  some sticky toffee pudding, that PB ice cream was awesome, incredibly toothsome, morish, peanut buttery, man, it was sooo good. Stuart matched it with a 2004 5 puttonyos Tokaji which was full of ripe apples, spices and a couple of other words I can’t seem to decipher – such is the hazards of taking notes at the end of lunch. In any case, it was another winner from Stuart. 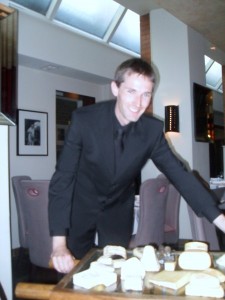 The Brasserie has 2 private dining rooms, the first seats 6 – 12, the second, the Butcher’s Block seats 6 -8 and is a cozy little nook next to the wine cellar. It’s a bit of an homage to Smithfields as there is a butcher’s block on the table where the waiter will carve up ribs or racks of lamb for guests. We were originally seated there but it was too dark for photos so we moved into the more brightly lit main dining room. 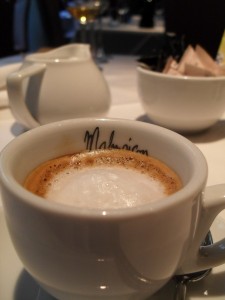 As we rolled out, I couldn’t help but marvel at how helpful Stuart was and at how well he matched the wines with our meal. That to me is what a good sommelier should do and I would definitely take his recommendations the next time I dine there.  All in all a great way to spend an afternoon and great wines to match.

11 thoughts on “Lunching at Malmaison”